The year starts off differently here in the northern hemisphere compared to the southern hemisphere. In some ways it doesn’t really feel like a new year — school and work just keeps going after a short break for Christmas; whereas in NZ just about nothing happens the first few weeks of January because 90% of the country is off somewhere on holiday. Neither is better or worse, just different.

We took the week between Christmas and New Year’s off school, but were right back into it at the start of January. The girls are doing really well, and learning and growing. We still have attitude struggles, but those seem to be getting better too (I’m still working on mine most of the time!).

We have had a couple of snowfalls of maybe half a foot or so, which the kids always enjoy. On the whole, though, this has been a really mild winter. There have been a few days that our temperatures have been the same as those in Christchurch! I don’t know if that says something about our winters or about NZ summers… 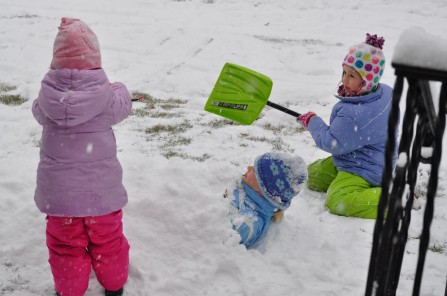 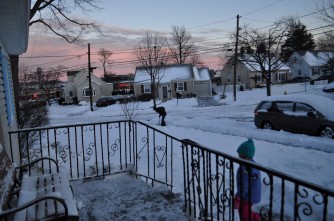 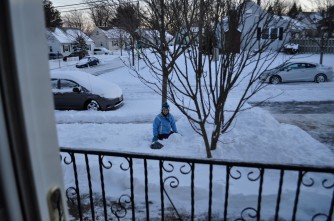 At the start of January, we had cousin Eva stay with us as her last stop before heading back to Vienna. It was a delightful visit! Lots of quiet and relaxed conversation. She even cooked us a gourmet meal one night, which was really delicious. 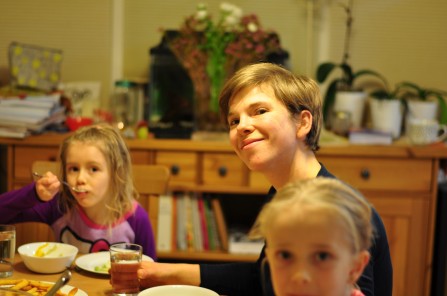 In January, Trump was sworn in, as most of the world knows. I don’t know what to think about the man. I don’t know if he’s really clever and shrewd or if he’s just a complete narcissistic idiot. He backs certain things that I’m very happy about (he has pro-life policies, for one), and then he does and says other things that are just beyond comprehension. I don’t know what the next 4 years will hold, but I do know that whatever happens it won’t be a boring ride. Seeing that I don’t like exciting roller coaster rides, my response has been to laugh, or for the most part the ostrich in the sand-type of response. The less I know, the less my blood pressure rises. This is probably not the best response, but I know whom I have believed, and He’s ultimately in control. I’m not trying to be fatalistic, I just really don’t want to know every crappy detail of what stupid thing Trump tweeted now. Too much freak show makes one freaky. End diatribe.

Yesterday I finished the Whole30. It’s basically a program where you eat only whole foods (fruits, vegetables, meat, eggs, nuts and seeds) for 30 days to give your body a break and to find out when you re-introduce foods how they make you feel. I’ve been wondering for a long time if dairy makes me feel groggy. We’ll see. :-) The first two weeks were hard, but then I got into a groove and it stopped bothering me. I didn’t even feel like I wanted the stuff I used to, and I can now even stomach a cup of coffee black. I think it would be too restrictive to eat like this 100% of the time, but I’d like to eat like this most of the time for the main reason that I got rid of my stupid mind fog. I could get a full night’s sleep and wake up tired — no more of that (except when I don’t actually get enough sleep!). That feeling of walking into a room with a purpose only to get there and wonder what on earth I’m doing there is gone. Some people report big weight loss and lots of energy… I can’t really say that was the case for me, but for the sake of some clarity of mind, I’d be willing to forego a few things.

Laurelin has been growing up. She’s so cute, so clever, and so… challenging. She’s a champion tantrum thrower and a very feisty fighter. I’m sure fighter in her will stand her in good stead one day, but for now they just make her mother bone weary. She’s a lot of fun when she’s not decided that she wants something to go her way. Which is a lot. Unfortunately for her, she has pretty stubborn parents too, so she seldom wins a fight. Maybe she’ll learn it’s not worth the energy soon and give it up, ha. It’s so funny — usually after a major tantrum, when she finally calms down, she’s so tired she needs a nap!

Yes, I let her use a real knife. She hasn’t cut herself yet. And yes, I watch her closely!

I’ve been thinking. Startling thought, I know. :-)  I’ve been thinking that our modern lives are just too busy, too full of distraction. I took an 18 month break from Facebook a while back, but have been back on it again for a few months, and I’m struck by how easy it is to procrastinate. How short my attention span can be, how I’ve trained myself to skim articles instead of actually reading them and then when it comes to reading real books I catch myself skimming. Bad habits are easy to form and hard to break. It’s not like Facebook is this big stumbling block for me, it just seems like such an apt metaphor for the rest of life. Everyone’s busy with trivial stuff, we’re all busy chasing… what, exactly? I do believe that God created us to work, and to work hard for His glory. I just wish things were simpler and more clean cut, and less busy. Busyness seems to kill joy. I guess it takes a lifetime to figure out how to find a healthy balance in it all.

I’ve been reading Door to Freedom by Jana Kelley, the same author who wrote Side by Side that I reviewed a while back. It was a very enjoyable read, and I’m hoping to post a review of it soon.

I signed Marica and Esther up for homeschooling ice skating classes for the winter, and they’re loving it! There’s also the perk that I get to join in on the other side of the rink. I’m way worse at it than the kids, and have had a couple of pretty hard falls, which makes me afraid of falling again, which in turn doesn’t make one skate very well. I’m gaining confidence, though! It’s a pretty fun way of working a bit of physical activity into the schedule.

You might have noticed I haven’t been posting on a weekly basis recently. Or maybe nobody’s noticed (or they’re relieved!). I don’t have time to blog because I’m sitting on the couch drinking tea and reading People magazine. :-) No, it’s not for lack of wanting to — it’s a matter of getting around it with the few spare hours in the day when the kids are in bed.

One of the things taking up evening time recently is my new role as Gifty Weddings‘ new marketing director. <cough/> We’re trying to push Ben’s little side business a bit more, but I know next to nothing about marketing, so I’m learning on the job. Hopefully I don’t lose us too much money in the process! Hey, if any of you know someone getting married soon who would like the idea of using a gift registry that is not tied to a specific store, please point them to Gifty!

This year’s Easter was a busy but lovely one. We kept up the tradition of making hot cross buns and egg dying, which the kids always love,

and on Easter Sunday we hosted a large crowd of church folk for a yummy dinner, followed by some rousing hymn singing. It was such a great time with people enjoying each other’s company and having some great discussions, mainly on theology and life. It was so wonderful to celebrate Jesus’ resurrection with such a neat bunch of people!

Before the dinner we had an Easter egg hunt for the kids, which was of course full of excitement.

And while we were all dressed in our Easter finery, we asked a friend from church to take a long-overdue family photo of us. We had a little fun posing in the street with midtown Manhattan in the background. Unfortunately I didn’t realise I had my transition lenses on (stupidest invention ever), so that doesn’t look the greatest, but that’s okay. 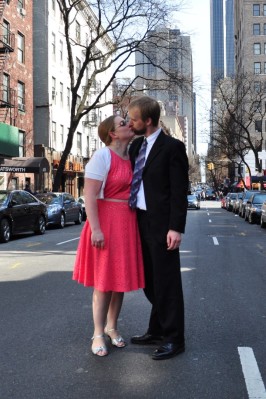 When I was in high school, a woman in our church (hi, Jantina!) got a bunch of us young’uns together for a day of cooking at her house. She gave us some basic recipes and tips and together we spent the day cooking and baking. Such a simple thing, but I remember that day very fondly and with much gratitude. I always thought I’d like to do something like that too, one day when I was a grown-up. And then I realized that, actually, I’m already a grown up, and I can do this now!

The nature of the church we attend in New York is that people come from all over the metropolitan NYC area, and we are very spread out. It really limits the contact we have with each other during the week, so whenever we get together it is great.

This was no exception. I wasn’t exactly teaching new skills to young’uns, because we’re all pretty close in age, but it was really fun just cooking together with a bunch of girls, to have an excuse to use my pretty tea cups (though looking at the photos now I notice that my table sorely lacked a tablecloth!) to drink tea of various sorts and eat the fruits of our labors.

Esther and Marica did a bit of helping too. Here Esther is chopping mushrooms, which was very nice of her because she detests them! 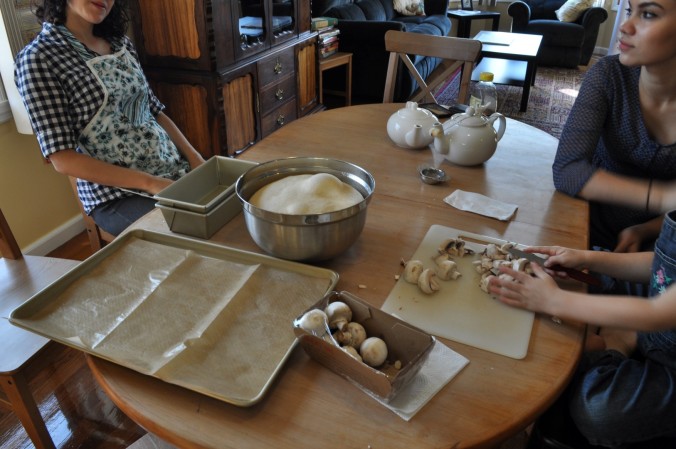 We made made bread and soup and a very nice dinner. It was a great team effort!

And that reminds me, I should get my act together and start planning our next cooking day!

As everyone knows — well, at least everyone who’s a fan of Tolkien — a hobbit comes of age at 33. I turned this ripe old age the other day, and had a fabulous party, mostly organized by Franci, my lovely hobbit-wife.

We had some great, down-to-earth hobbit food cooked by Franci with some help from Lillian: loads of mushrooms (fried in butter), homemade bread rolls with “Beorn’s” creamed honey and butter, Mum’s meatloaf (“dwarvish meatloaf”), punch (“Miruvor”), ale from The Green Dragon, “Sauron’s eyeballs” deviled eggs, and lots of other yummy things I’m forgetting.

I wrote a little speech that kind of paralleled Bilbo’s speech at his “eleventy-first” birthday party (and Frodo’s 33rd). There were a couple of Lord of the Rings-based games and riddles.

There was a small crowd of maybe 15 mostly from church and a couple from work. A few people even dressed up.

In true Hobbit-fashion, Franci and I organized and wrapped gifts for each of the guests (though there were no silver spoons). 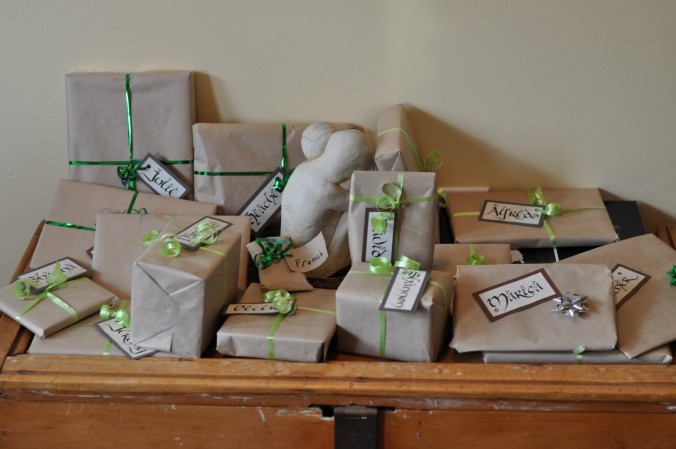 All in all, a fun time! I highly recommend a Hobbit coming-of-age party for your next trend-setting event. :-)

Aliens in the Apple
Blog at WordPress.com.