The 4th of July

Earlier this month, on the 4th of July, the United States of America celebrated Independence Day. It’s been 234 years since America declared independence from Great Britain, and for the average American England is now just some far away place where people talk funny. There are many ways in which Americans celebrate this day — there are often parades in the mornings and fireworks at night, and a lot of people stay home and barbecue. Others use the excuse for having street parties that carry late into the night.

This year the 4th of July was on a Sunday, so after evening church, Ben and the kids and I headed up to the west side of Manhattan to where the Macy’s 4th of July fireworks were going to be. Since it was still afternoon we spent a fair bit of time in a nice playground, had a picnic dinner, and then went down to the Hudson river. Well, not really down to the river, because only privileged people with tickets were there, but close enough anyway so we could have a fairly uninterrupted view of the skyline. There we waited in the street until it was dark along with thousands of other spectators. It was a strange sight to see people sitting on picnic blankets in the middle of the street (including us!). The concrete radiated heat into you as you were sitting, and the air was pretty stifling until dusk when it cooled down slightly. Or maybe we were just distracted by the fireworks! 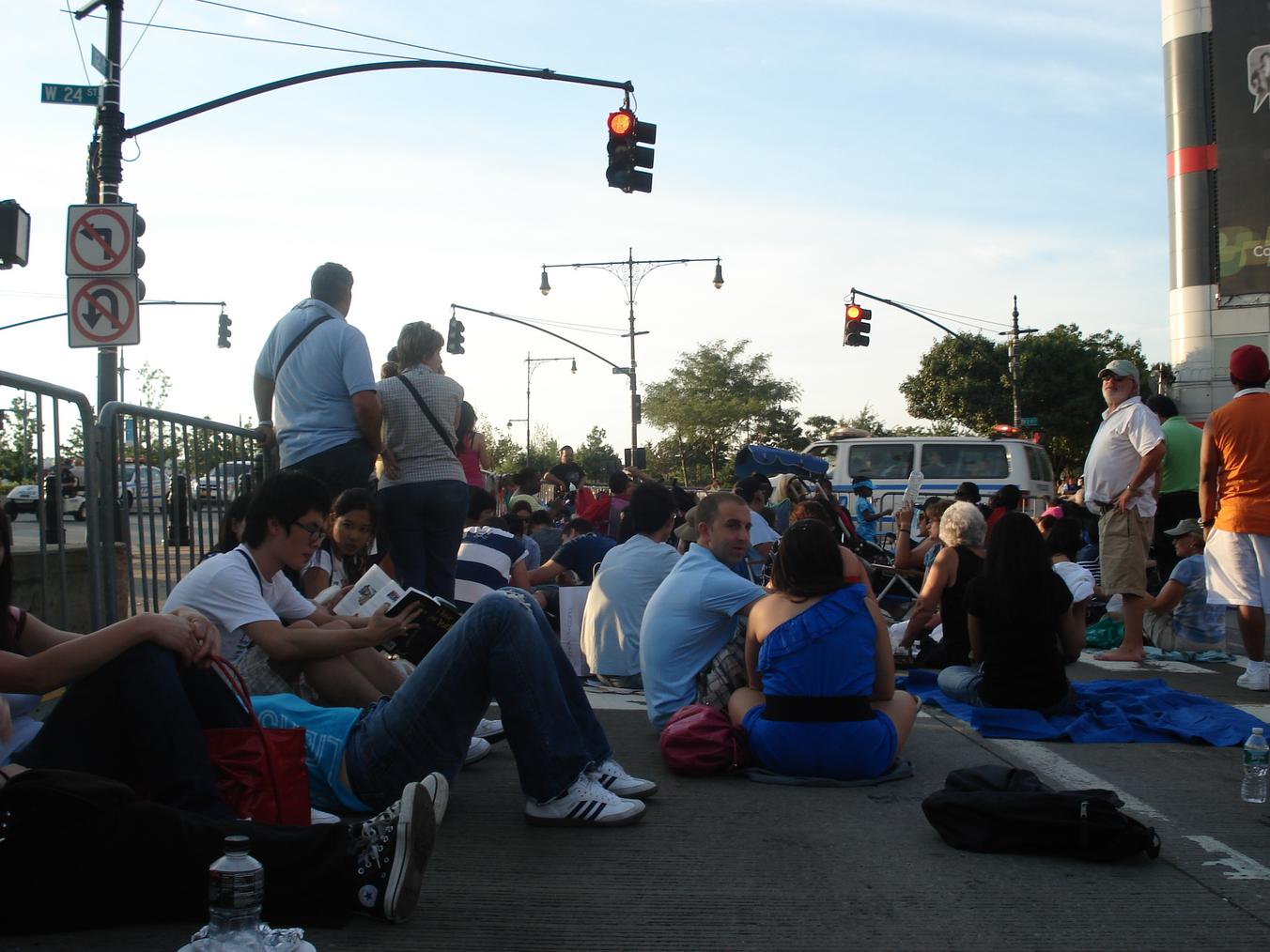 Thankfully Esther slept for a bit. She’s so gorgeous when she sleeps. Actually, she’s always gorgeous. :-) 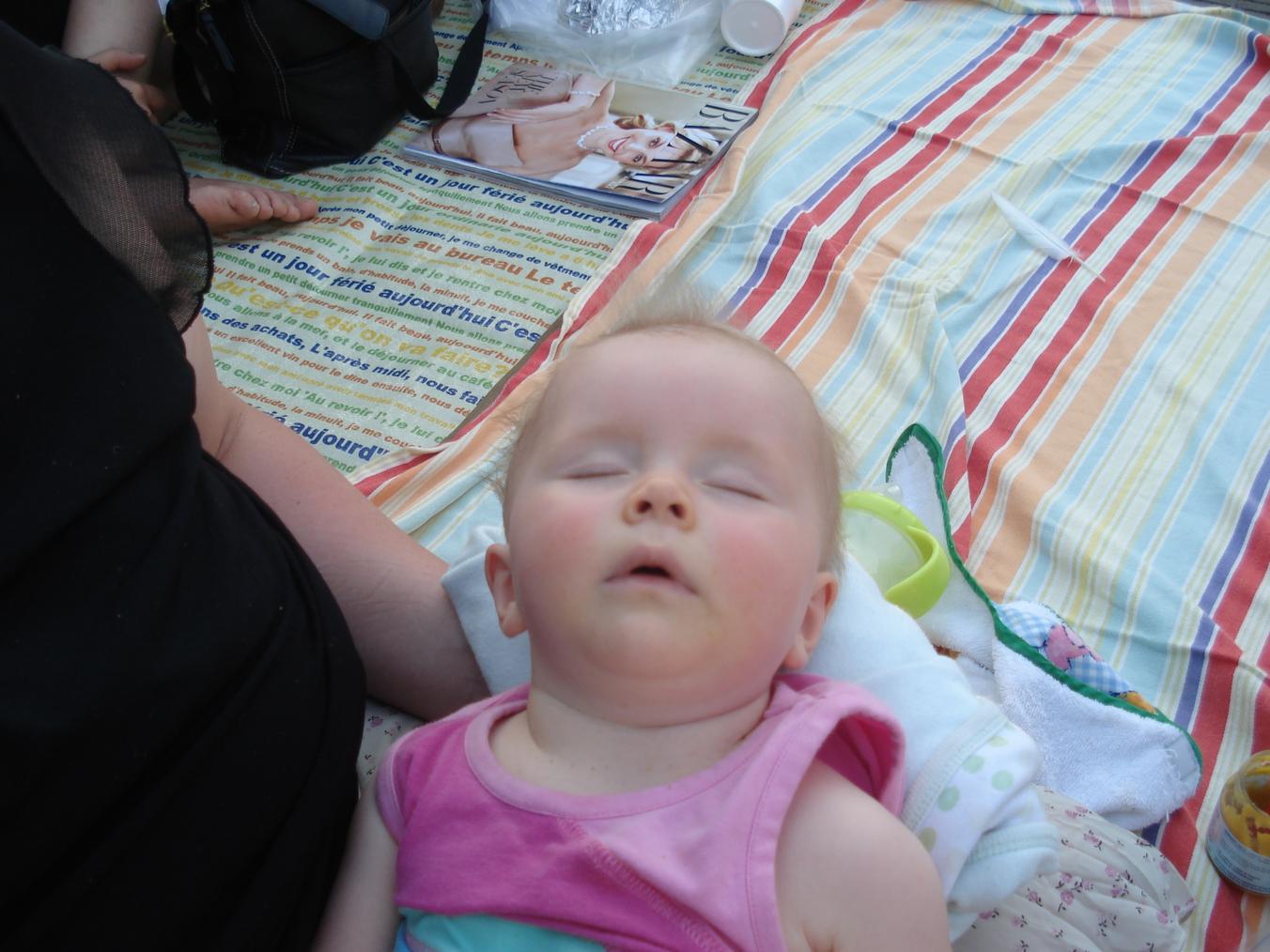 And here’s a goofy photo of me. Notice the two Asian ladies in the background. I think we must have committed some social faux pas by putting our blanket right next to theirs. They very properly kept their feet off our blanket, sometimes looking uncomfortable, but they at least liked Marica enough to take photos of her! I guess a blonde kid like her is pretty novel. :-) 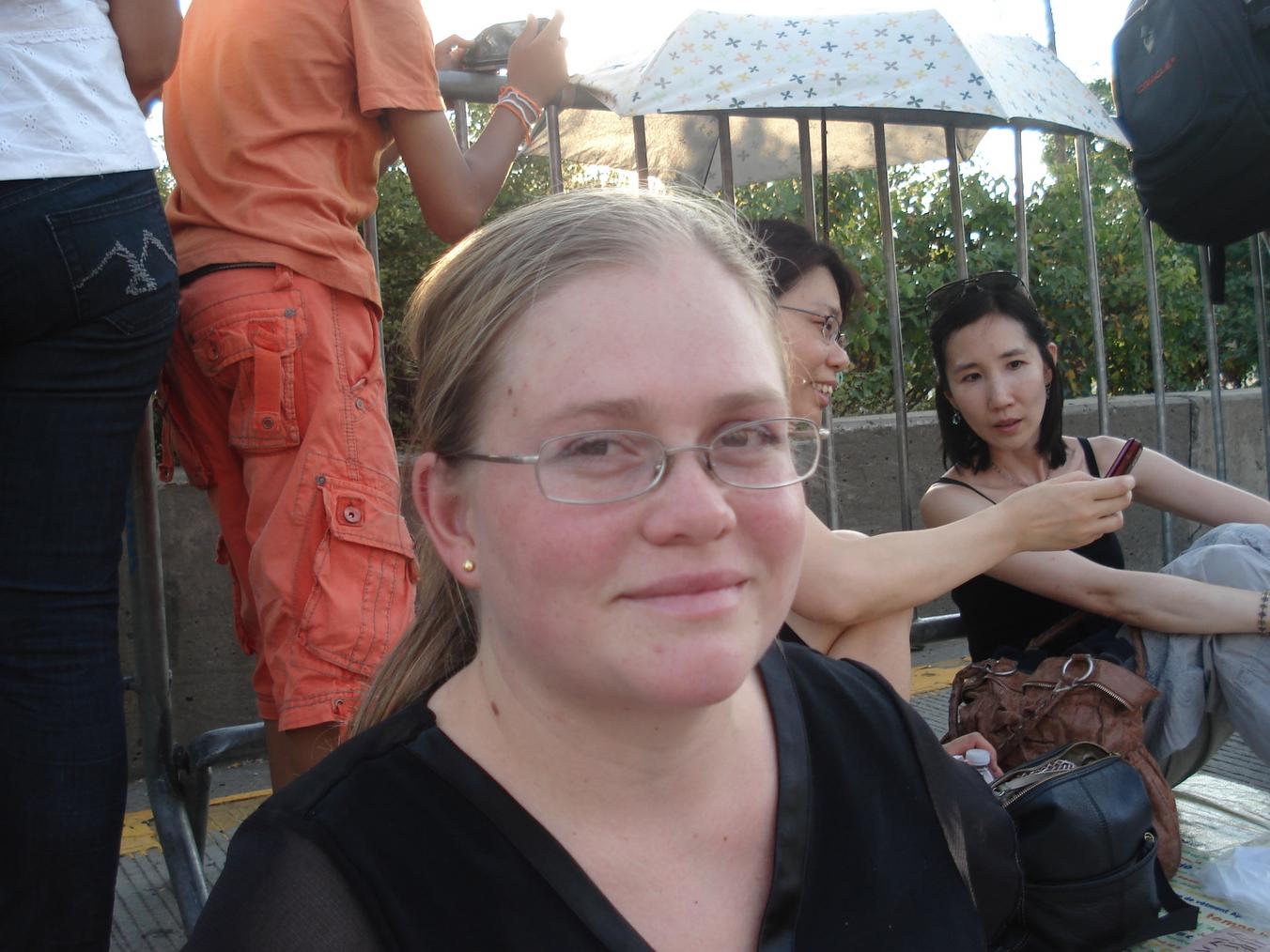 Of course we didn’t manage to get any decent photos of the fireworks, so if you want to see some of what we saw, here’s a photo from the New York times website, or you can look at someone else’s flickr photos.

I did remember to turn around, however, and capture a wide-eyed girl. 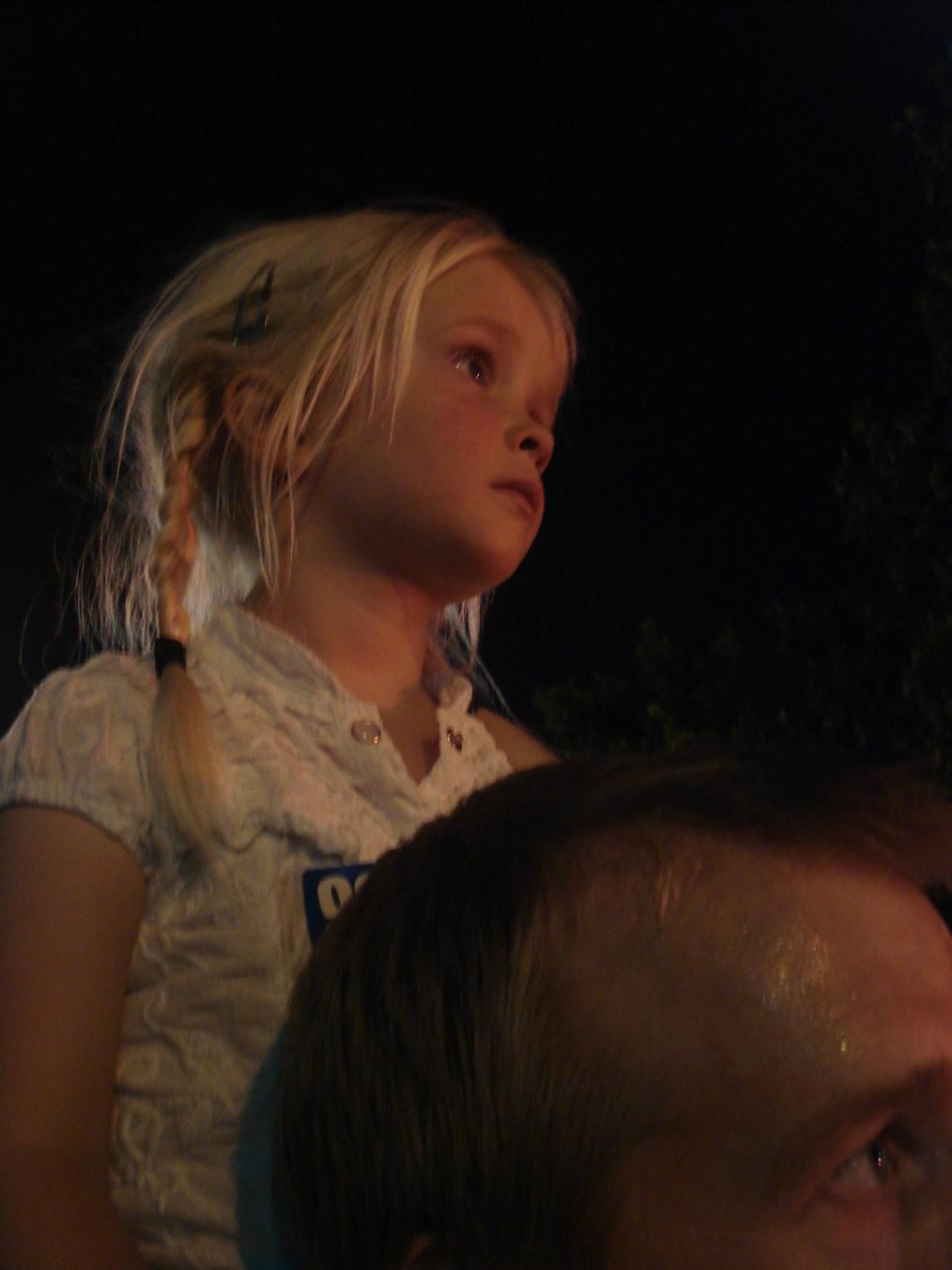 Notice how sweaty Ben’s forehead is? Summer here has been very hot. It’s usually around 30 degrees Celsius here, plus or minus a few degrees. Often plus. Now I know that most of our readers are Kiwis and have been experiencing a very long and rainy winter and the last thing you want to hear is me complaining about how hot it is, so I’ll promptly stop that train of thought. :-)

I’ll leave you with some funny pictures of a certain breed of patriotic Americans enjoying street parties on the 4th of July. 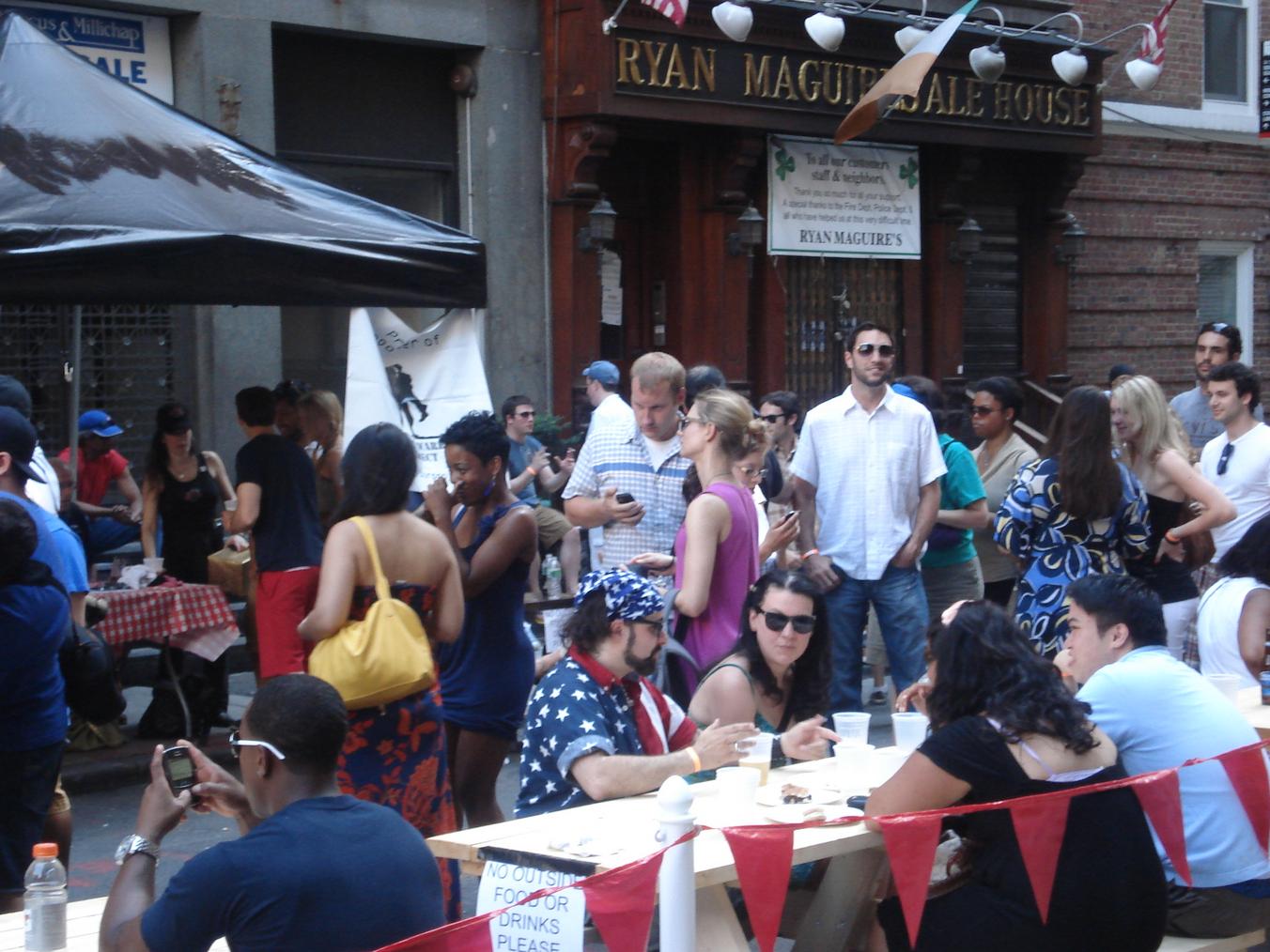 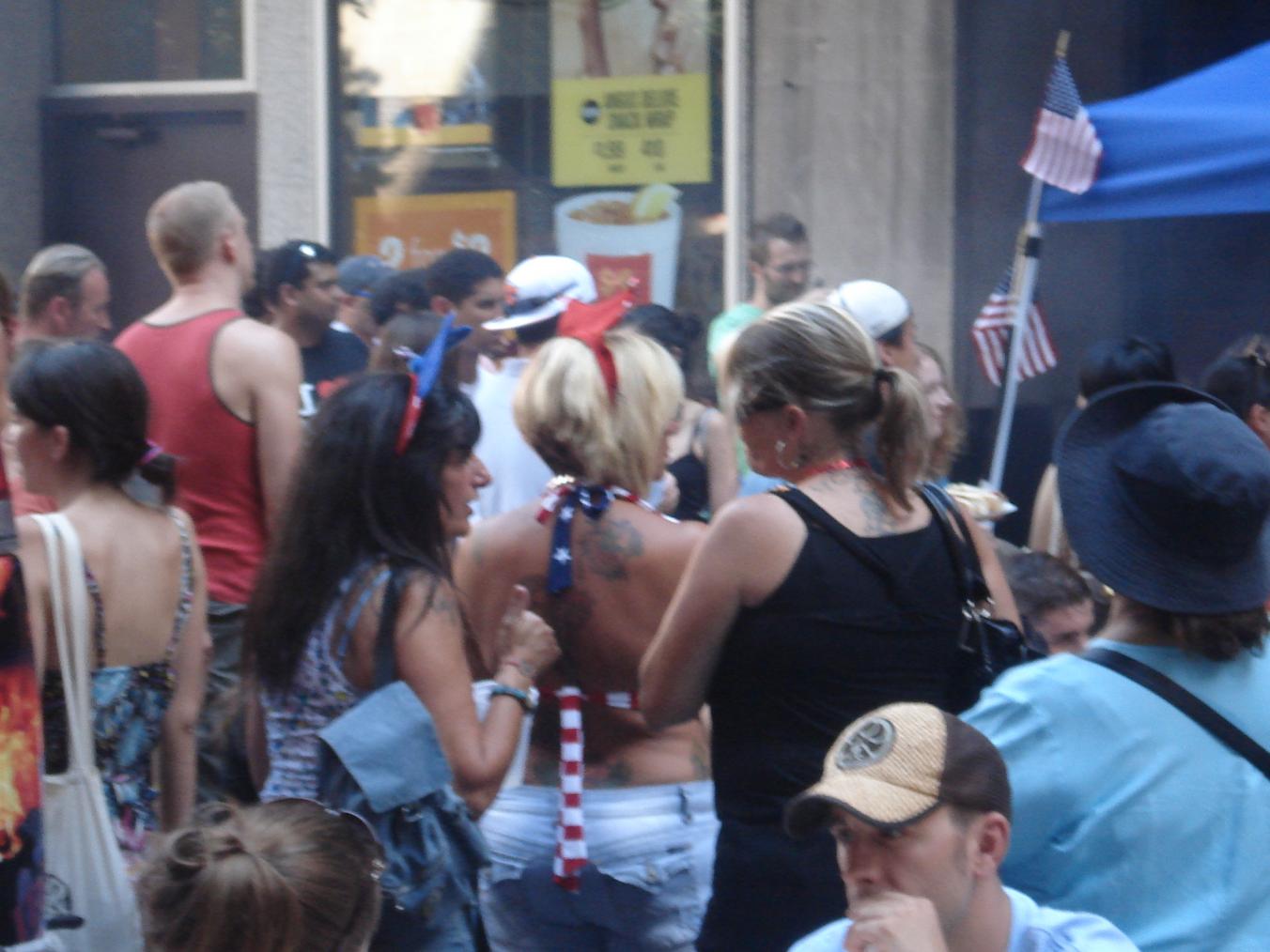 Great picture of Marica watching the fireworks! We’re back in town now, feeling a bit depressed by the city after being out in the country. Susanna says she’d love to get together this week