Franci 19 Mar 2013 Being tourists The Roadtrip

I know there are people who love Vegas. I find this difficult to understand because we didn’t enjoy it at all! It was like a sleazy version of Times Square, but it had good, cheap accommodation that was en route to our next destination. And so we went ahead and booked a hotel that was touted as ‘kid friendly’ and hoped for the best... 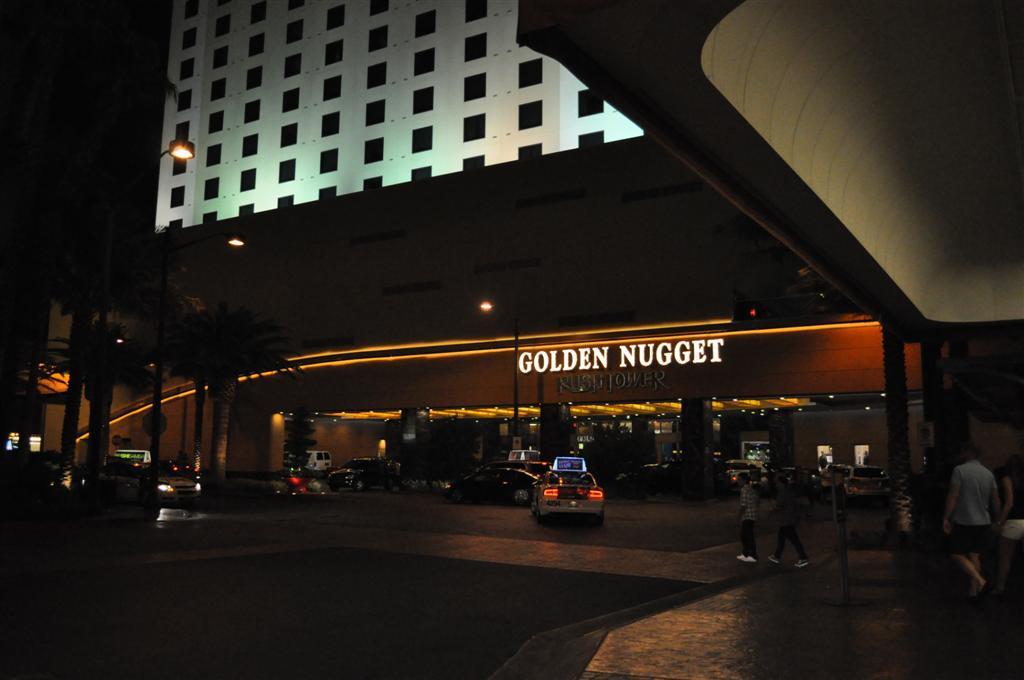 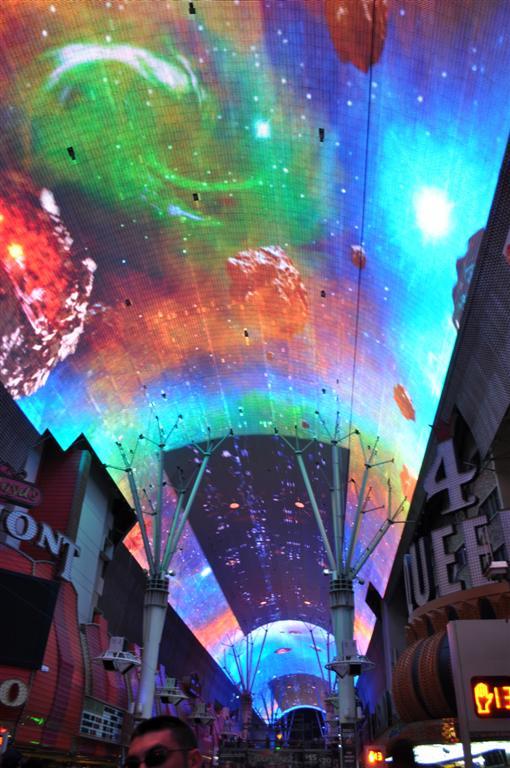 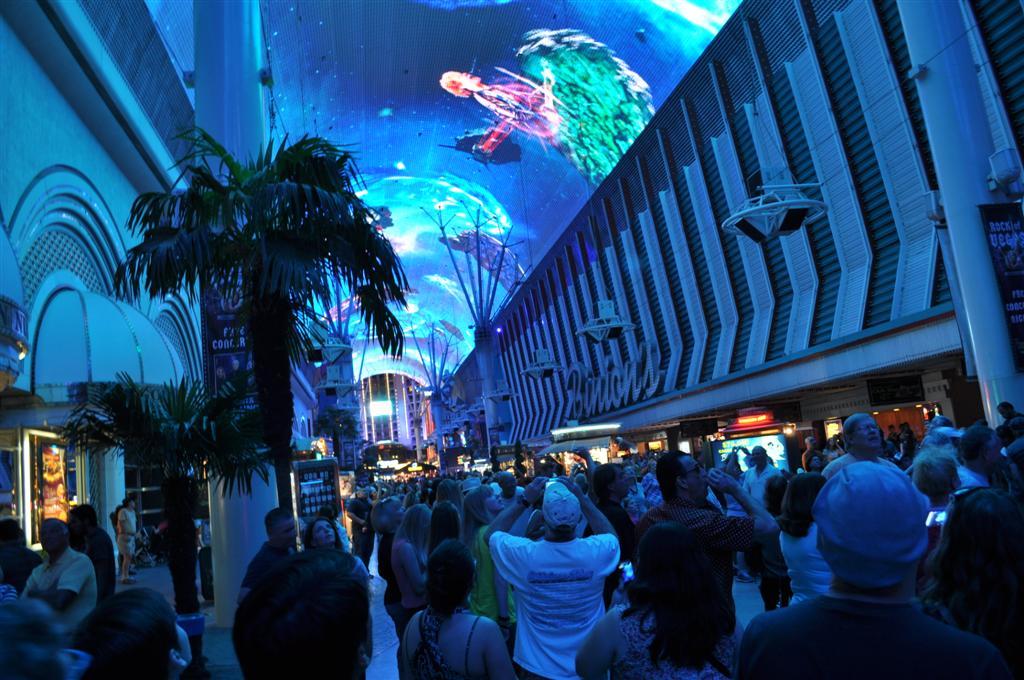 It turned out that the only kid-friendly thing about our hotel was the pool, which happened to have a shark tank in the middle of it, with a water slide going through the shark tank. Now that was pretty cool! Marica was brave enough to go down by herself, once she got to the top after a long wait and heard that the rules said you couldn’t go down in twos. 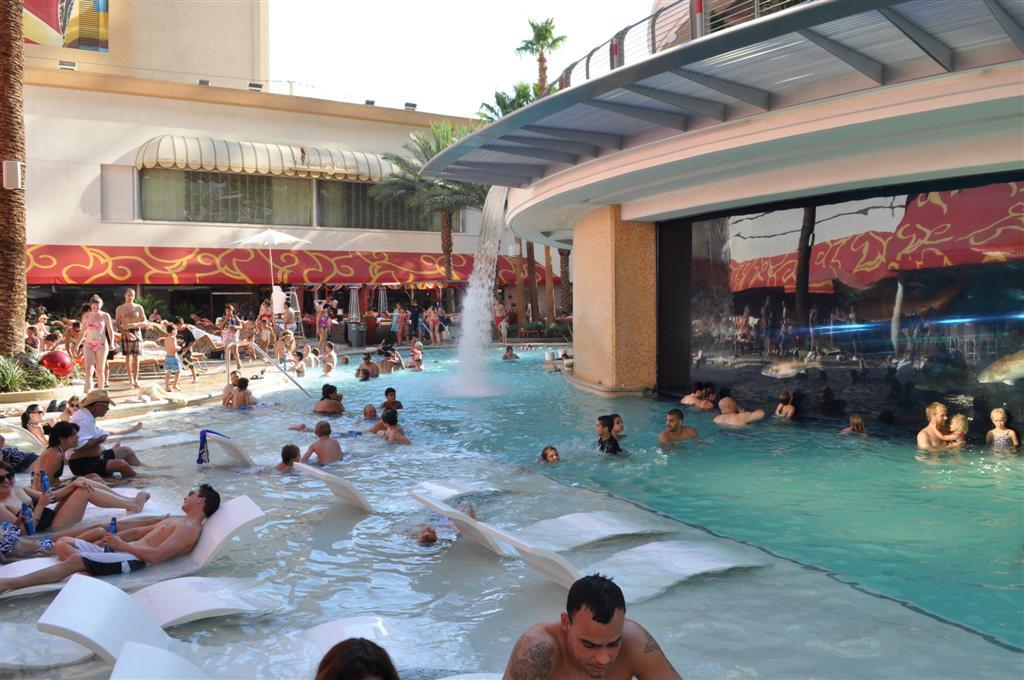 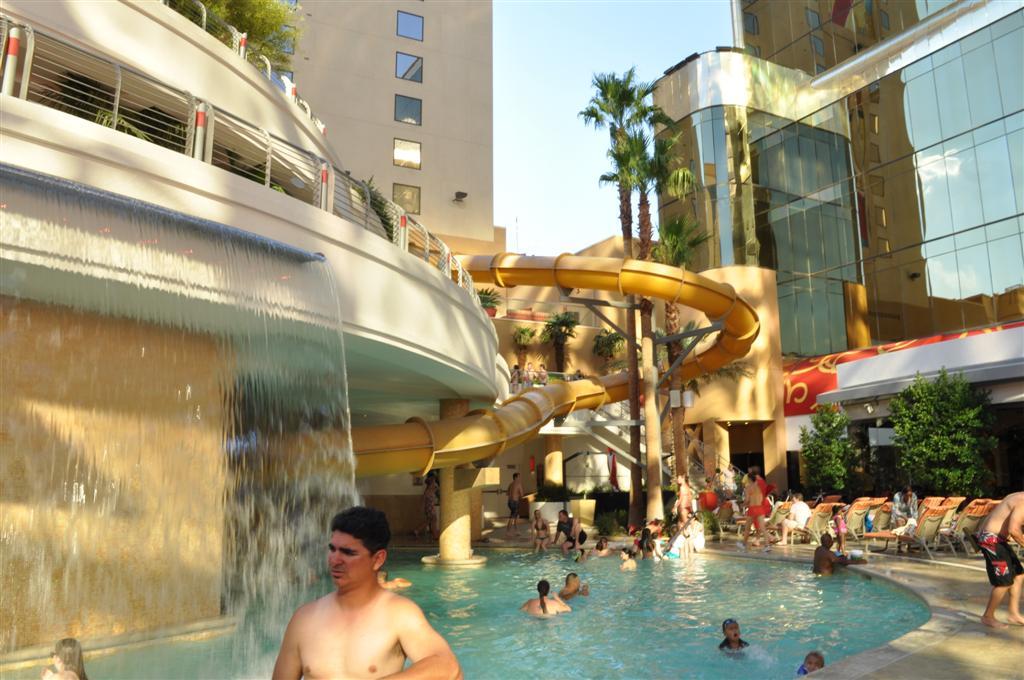 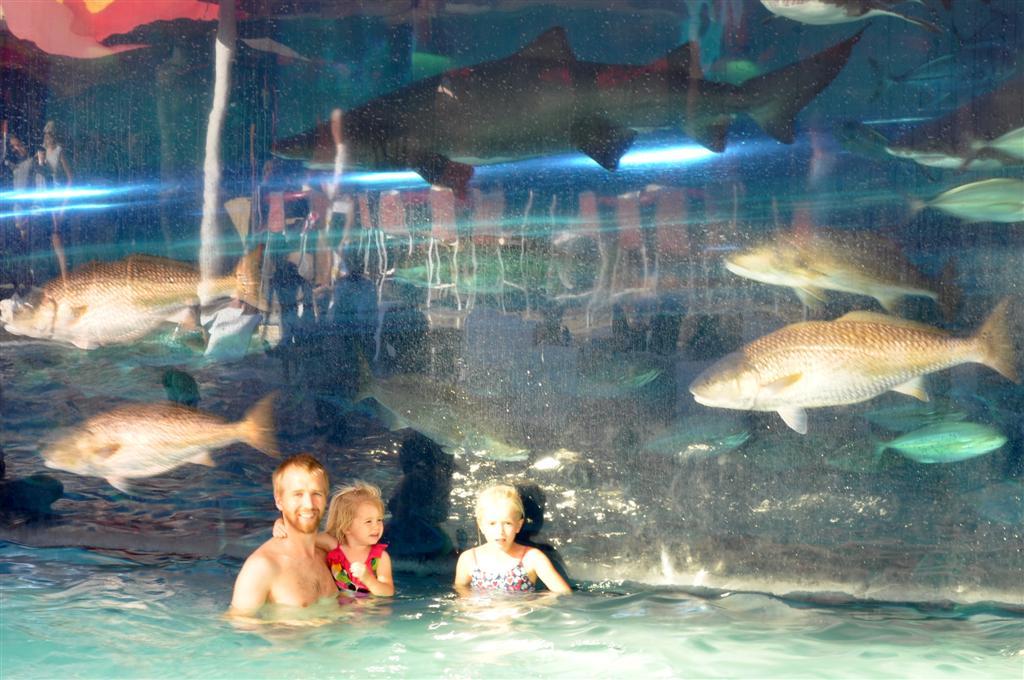 We were a bit naive in thinking the gambling would be separate from the rest of the hotel. There were slot machines even in the hallways and poker tables next to the pool — people never had to go far to get rid of the money burning their pockets! 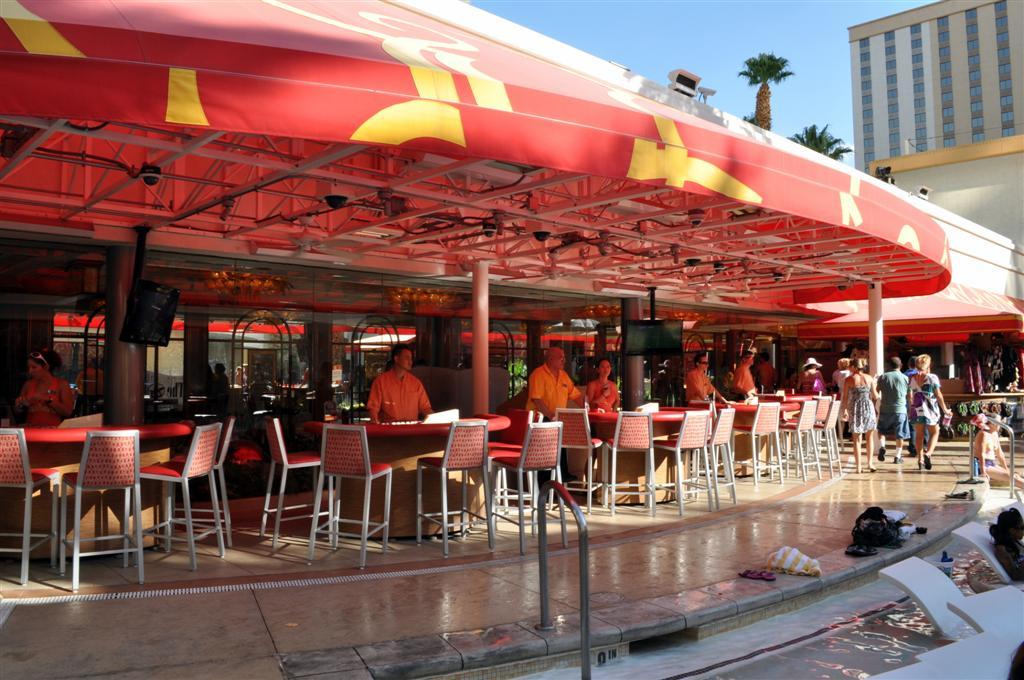 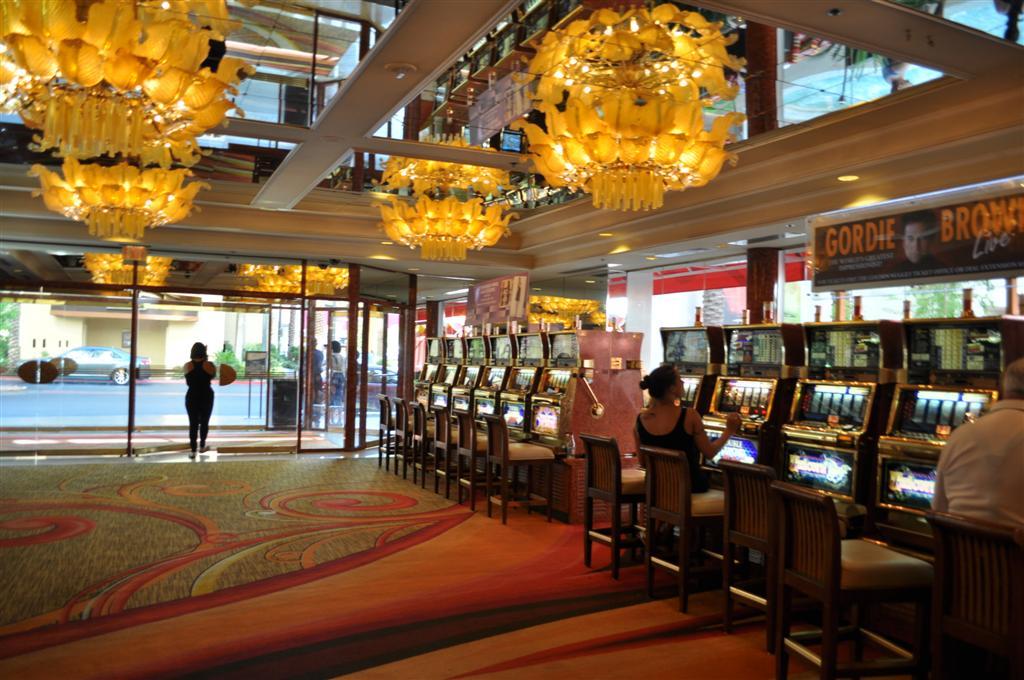 Our room was very nice and clean and tidy though, so nothing to complain about there. This is what the hallway looked like — I felt a bit like it was some sort of optical illusion. 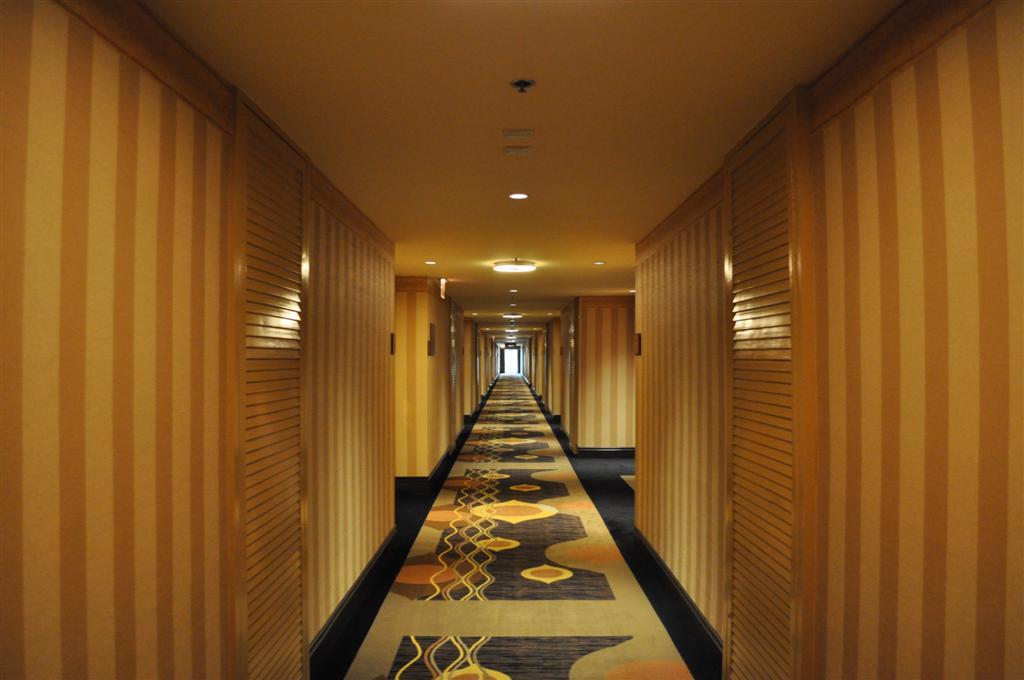 We did have one very enjoyable experience, and that was at a Japanese restaurant one evening where the chef prepared the food right in front of us. 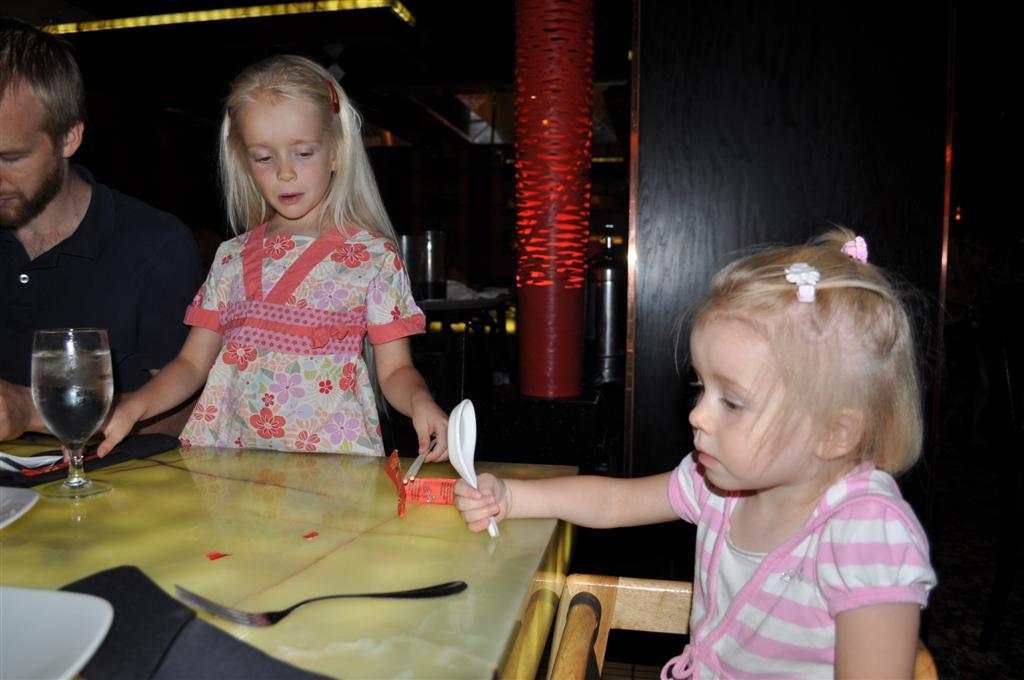 The chef built this ‘mountain’ out of onion rings, poured some flammable liquid inside, lit it and it turned into a volcano! 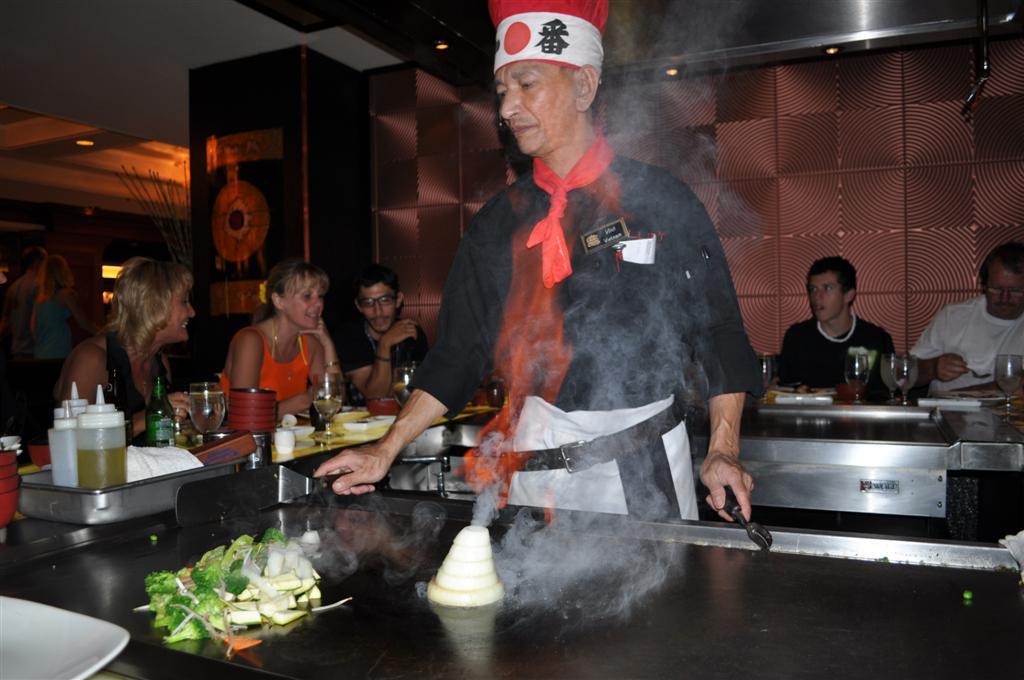 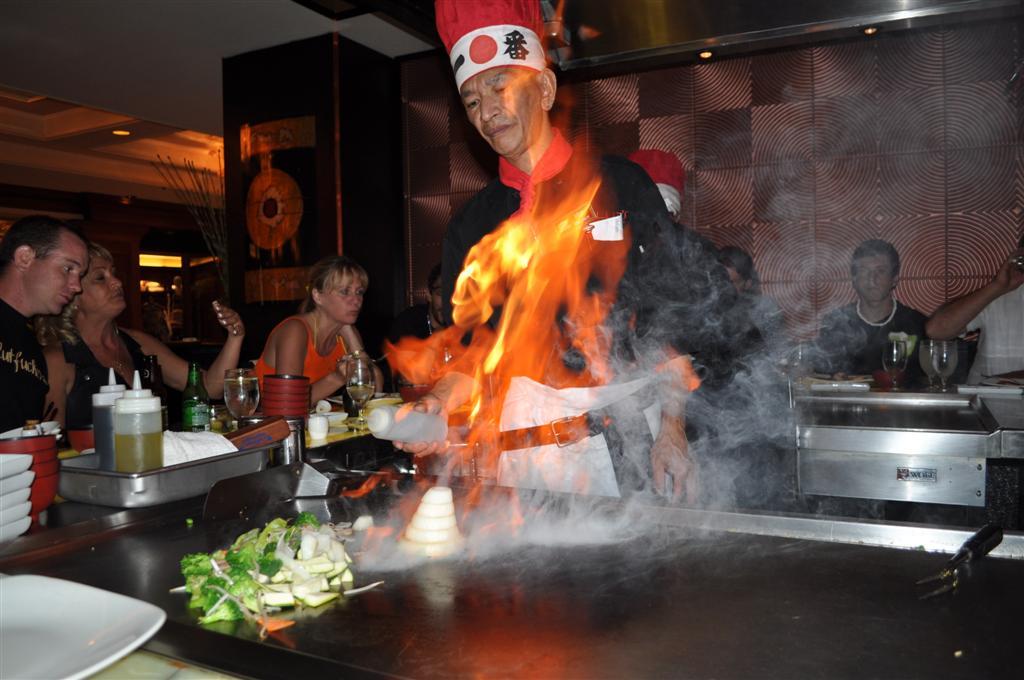 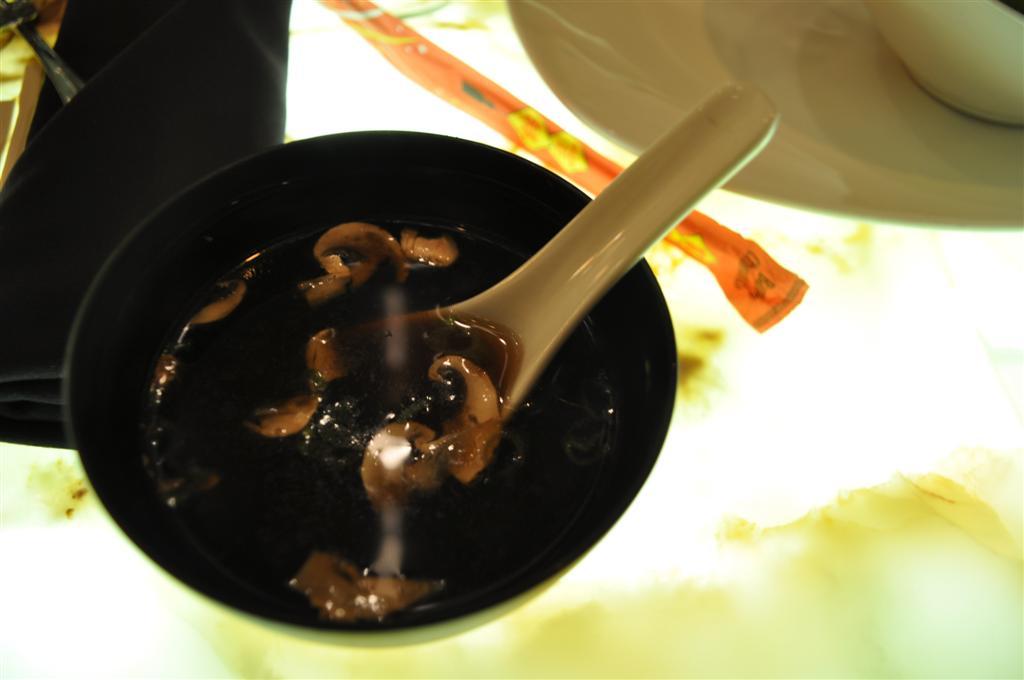 The other diners were really classy, as testified by the guy on the left. The woman with him seems not to mind what that implies about her. 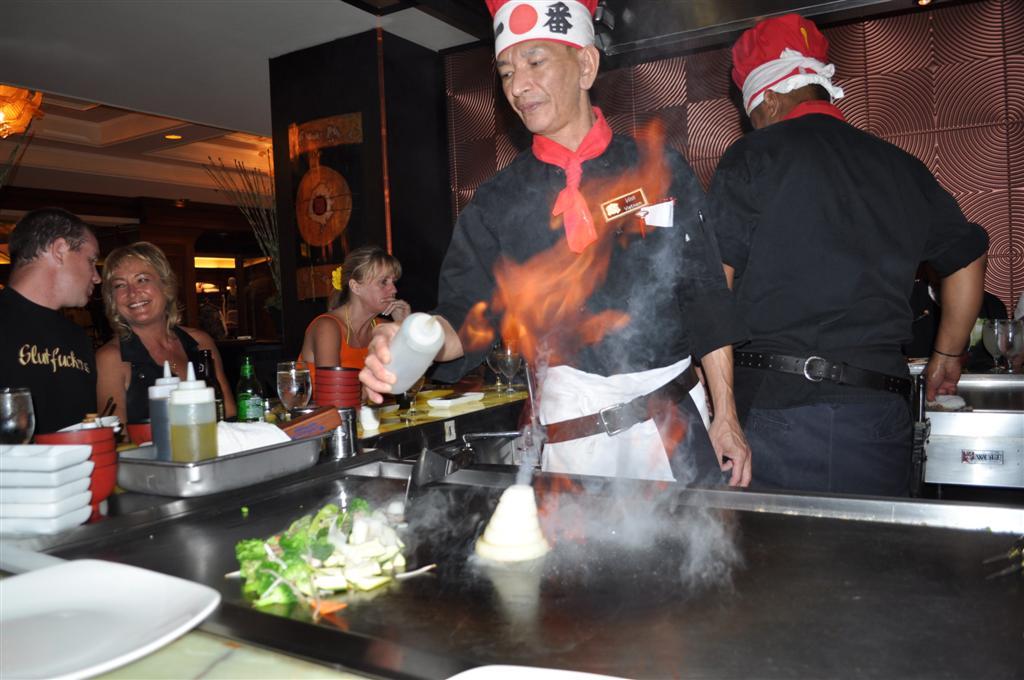 Now, some people have told us that we should have stayed at a different hotel and then we would have loved Las Vegas. Perhaps. There were certainly plenty to choose from, and we did not stay at one of the more expensive hotels on The Strip (we didn’t want to pay an arm and a leg!). We did drive down The Strip in the evening to gawk at all the hotels and lights and then had an experience that soured or experience of Vegas even more — a woman in an SUV rear-ended our car. There wasn’t a huge amount of damage, but it was bent enough that the boot wouldn’t close, which if you remember the photo from the last post, was sort of imperative! 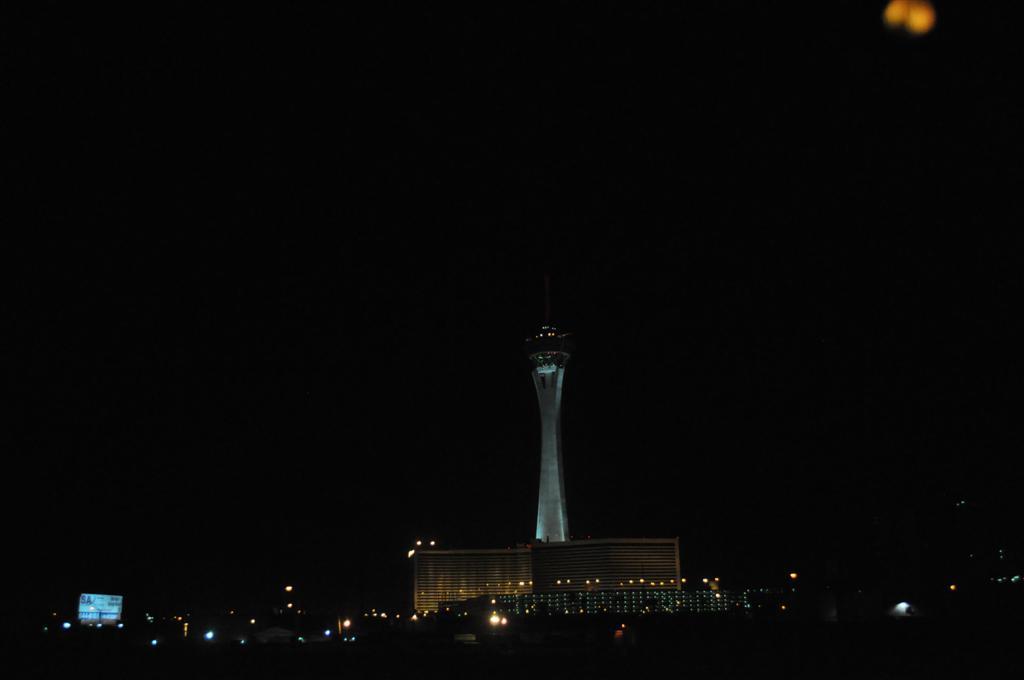 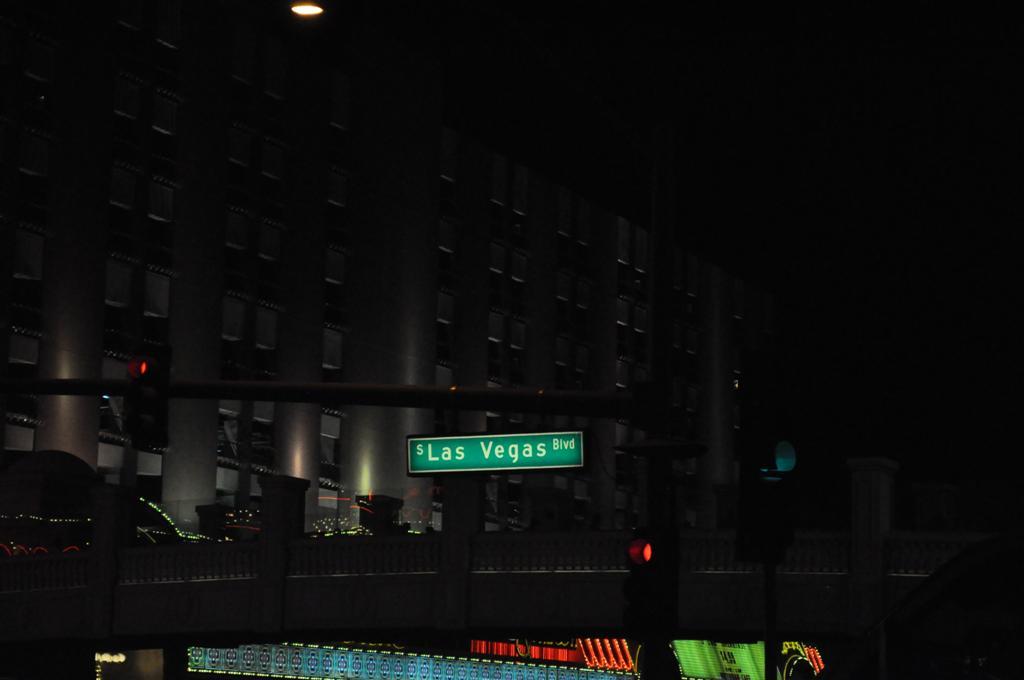 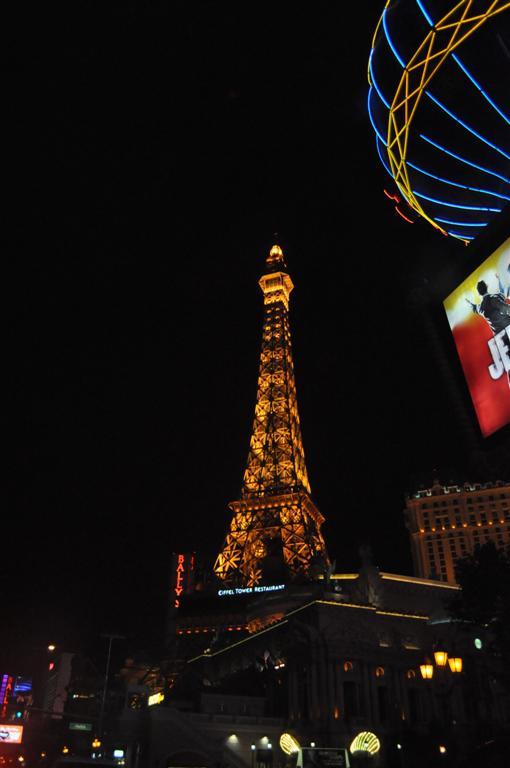 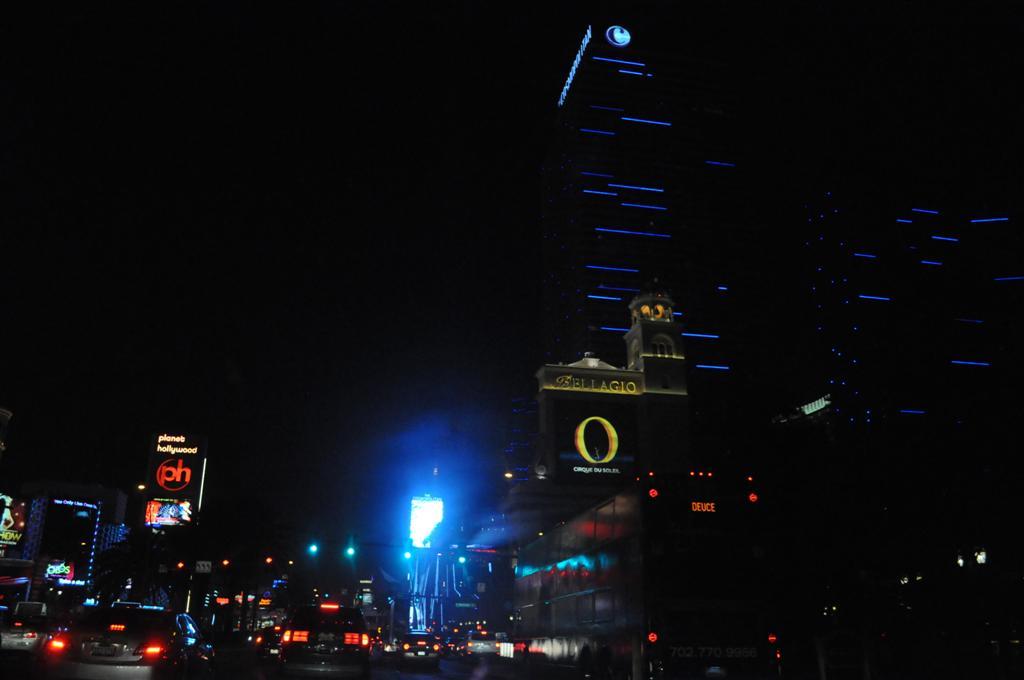 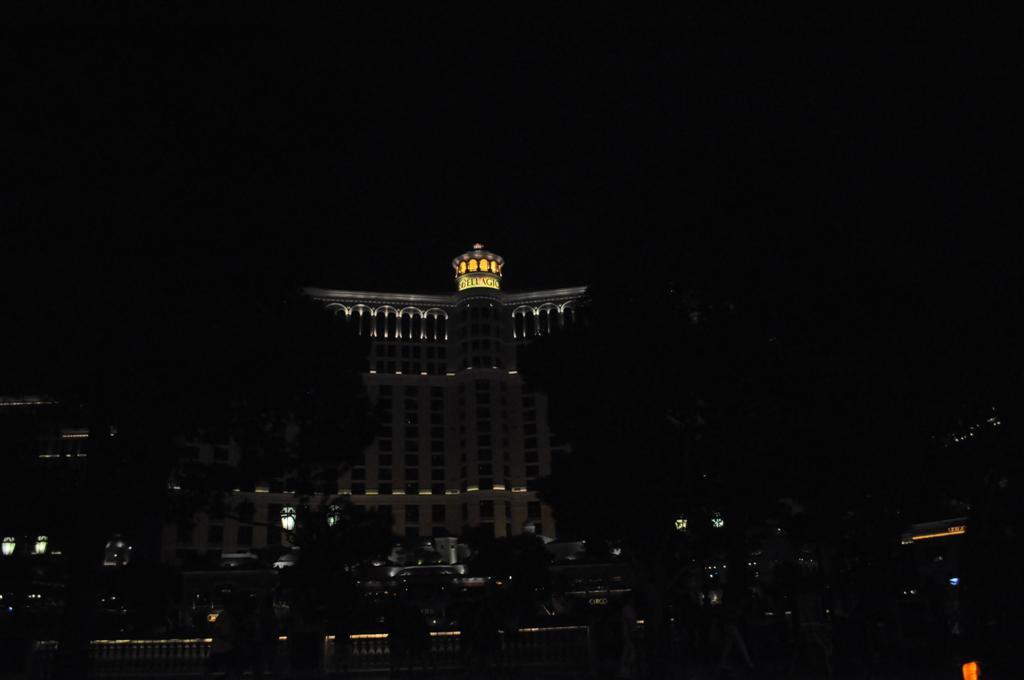 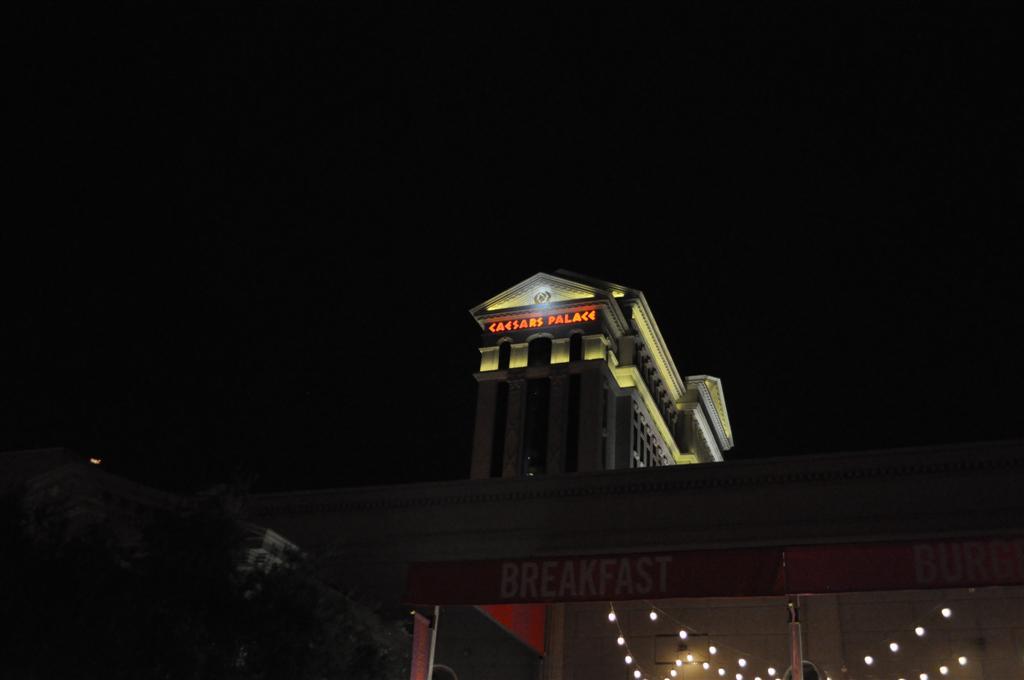 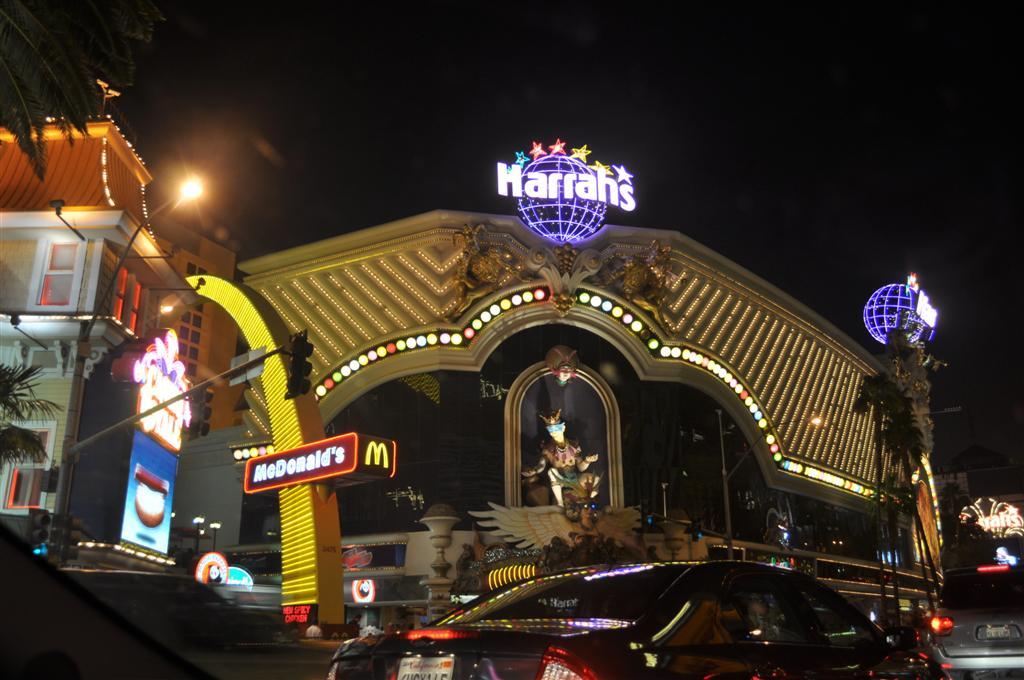 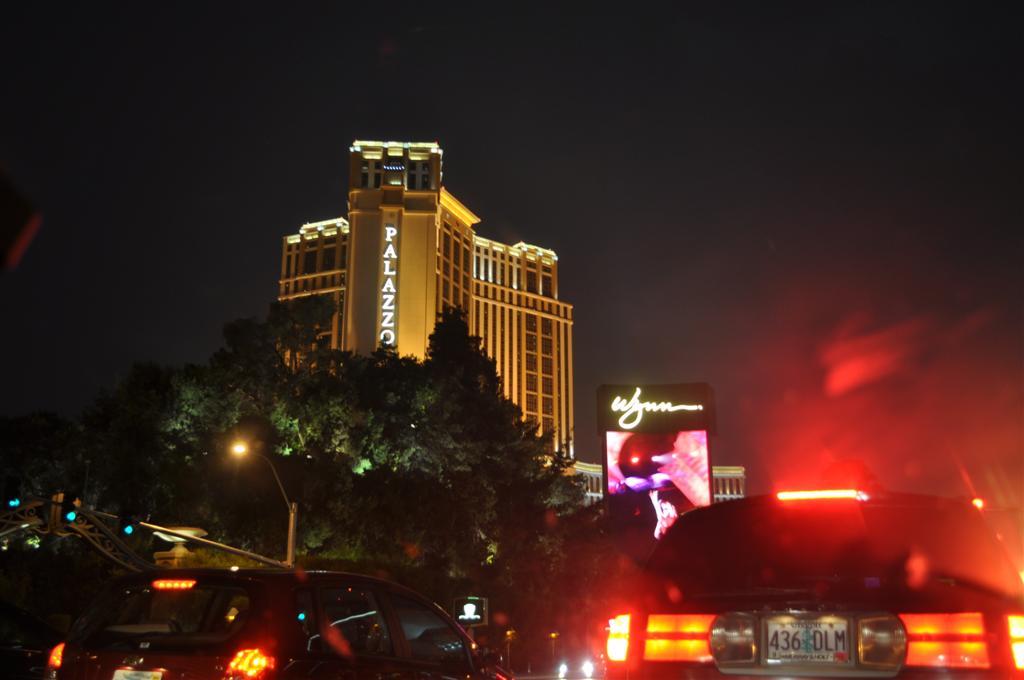 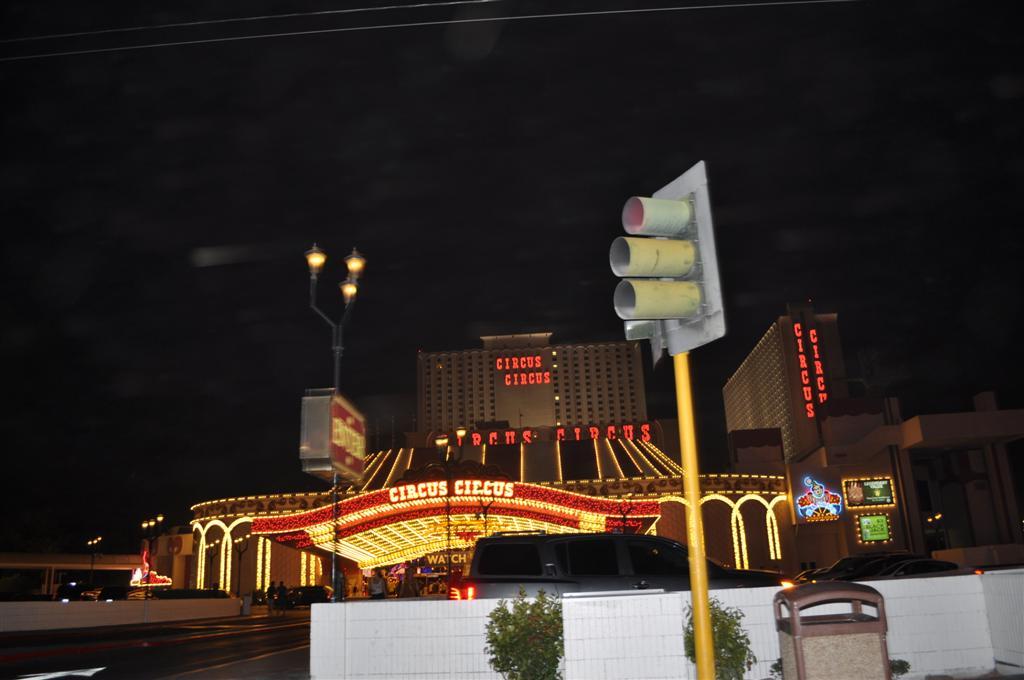 This meant that the whole next morning was taken up with Ben trying to get a new car from Hertz, who didn’t have one exactly the same (we had the biggest car in the ‘large sedan’ category) and it turned out that the one they gave us was just simply too small to fit all our luggage. So then after all piling into this too-small car, we headed back to Hertz and upgraded to an SUV for the last 8 days of our trip. Good things DO come out of Vegas! :-)

Once we had our new rental car, we were quite behind schedule for our next destination: Lone Pine, on the west side of the Death Valley.

Not that I’m planning to go to Vegas ever, but I have heard that the murals in some of the hotels/casinos are amazing. Maybe an area that’s meant to look like Venice/Rome/Greece?? And the shark tank in the pool sounds exciting.

Our one and only visit to Vegas was just so we could say we’d seen it (we were in the vicinity anyway). We also got very inexpensive accommodations and spent all of about 12 hours in the city. We arrived after dark and could see the whole sky above it lit up from miles away on the highway. We saw rare white tigers in one of the casinos. Food was also inexpensive and the hotel offered a buffet breakfast for $5 (that was 13 years ago). We found there were even slots in the bathrooms, but the only money they got out of us was for food and lodging. It was interesting, though I’ve never had a desire to go back!

OK, I’m glad we stayed at Lake Mead near the Hoover Dam instead, even if it was 45 degrees Celsuis!! The shark pool - and the people pool - do look pretty fun though.

Here’s a tidbit: at the home-schooling conference I went to last Friday/Saturday, one of the talks was about colour and its effect on our emotions, behaviour, and learning. Apparently a lot of this colour psychology stuff is scientifically tested and proven; used all the time in the marketing industry. (As you might suspect, I hold to it with a skeptical grain of salt!) But red and bold yellows are the colours which make you feel hungry; raise the body temperature, pulse, blood pressure, and adrenalin levels; and encourage risk taking. Look at fast-food chain logo colours next time you’re out. So I noticed the colours of the seating at the pool-side, and the psychedelic yellow of the hall-ways!

Thanks for the report on what Las Vegas was like. The lights look amazing. I imagine it was interesting to see it all, but now I know I can omit it from my “to see” list. Besides, it would just be depressing to think about the people that are caught up in the emptiness.
Mum