A brief history of Hoyt

As far as I know, not many Hoyts in my extended family are into family history. I’m not exactly either, but it is interesting when you run across a bit of good old ancestry (actually, an old friend from Masterton put me onto most of this stuff).

Note that if this bores you, just skip this post (you’ll only Miss Congenealogy :-). I’m planning on a more photo-oriented part two which looks at Hoyts and Hoyt St here in contemporary New York City.

First, if you really want to learn about ancient Hoyt history, you’ll probably want to go to the authoritative, 718-page source: A Genealogical History of the Hoyt, Haight and Hight Families by David Webster Hoyt. You can buy it for US$47 on Amazon.com, but it’s also available for free on Google books, which is where I’ve been skimming from: 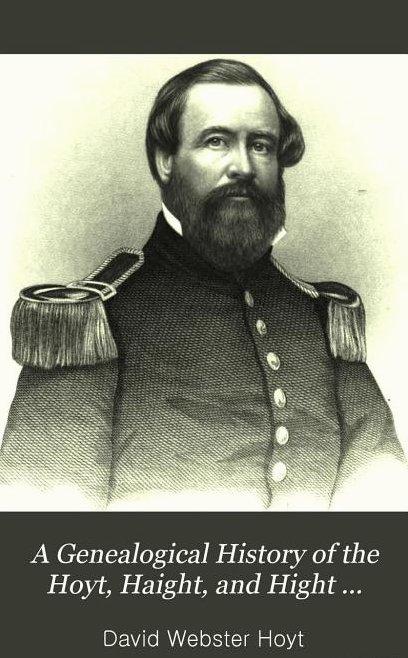 I’m not sure who’s on the cover, but he looks just like Dad, doesn’t he?

Anyway, the first thing to note is that Hoyt, Haight, and Hight, and the other 16 spellings he mentions, are variant spellings of the same name. Today it’s usually spelt Hoyt in the USA and Hoyte in England, but apparently back in the day they weren’t so concerned about consistency. As the author puts it (I thought Mum would find this interesting):

In the earlier periods of this country’s history, there seemed to be no settled orthography for proper names, especially surnames, and each clerk and recorder spelt as he pleased. Sometimes individuals even wrote their own names differently at different times, and some evidently did not know the proper method of spelling them.

Apparently “Hoyt” comes from the old English word “hoit”, which means to leap or caper. Another quote from David Webster Hoyt, which I found rather funny:

The original ancestor of the Hoyt family must have been noted for his agility … The name implies, either that the one who first bore it was accustomed to jump and move quickly, or that he excelled in leaping and feats of agility. The Hoyt family in general seem to have inherited something of the physical ability of their progenitor.

So now we know where the unicycling and handstanding comes from.

As for ancestry, the farthest back I can trace (going up the male, Hoyt line) is Walter Hoyte, born in England in 1490. He had a great-great grandson Simon Hoyt, who was born in 1590 and emigrated in 1628 from Dorset, England to Connecticut, USA (though I don’t suppose the States were very United back then). I’m Simon Hoyt’s great-to-the-power-of-10 grandson.

More interestingly, one of the descendants of Simon Hoyt was General William Sherman, (in)famous for the scorched earth, “quash the rebellion!” policies he implemented against civilian property in the South during the American Civil War. It so happens I’m 5th cousin, 5 times removed from this gentle fellow. (You can read Sherman’s memoirs where he talks about visiting his Hoyt cousins.)

Brenda kindly put together a little spreadsheet showing the connection:

My 5-greats grandfather, Nathaniel Hoyt, born in 1750, was a sergeant in the American Revolutionary War. Now that’s more like it — putting the Brits in their place! :-) Interestingly, Nathaniel was also a resident a New York City.

Enough research for one evening! If you’d like to know more, follow the links, especially to the book by David Webster Hoyt. Ancestry.com is also an interesting place to go — it’s a for-pay service, but you can try it out for two weeks for free. Let me know in the comments if you know or discover other interesting stuff.

I’m pleased that you found it so interesting.

Seeing where we ‘come from’ always brings surprises. My “very distant” cousins include Celine Dion, Madonna, and Hillary Clinton! :)

Thanks again, Brenda, for the inspiration and pointers!

Ben, I’m wondering if you could talk your Dad into the groovy hair style.

I have heard that those who are really interested in finding out about really famous people in their ancestory tend to struggle with an inferiority complex! You know, trying to make up for some lost pride….

Oh, by the way, you may have heard that us Stoltes also come from a famous line of German nobles and even had a mountain (hill actually) with a castle on it named after them….. :)

This is very interesting.
I have barely begun to research my Hoyt ancestry (my maiden name).

We are all 150th cousins or less, usually much less.

My husband is a 1/2 5th cousin 4 times removed (1/2-5C4R) to Sherman. We also have the David Hoyt book and I’m in the process of finishing my husband’s family history for the Hoyt side of his family. Wish the book had better indexing such as Hoyt, Jedediah or Hoyt, Stephens, etc. Takes forever to find whoever it is that I’m looking for.