Last Friday, Franci and I went to a Broadway show for the first time: Billy Elliot the Musical at the Imperial Theatre. Here’s a photo we took just before we went in: 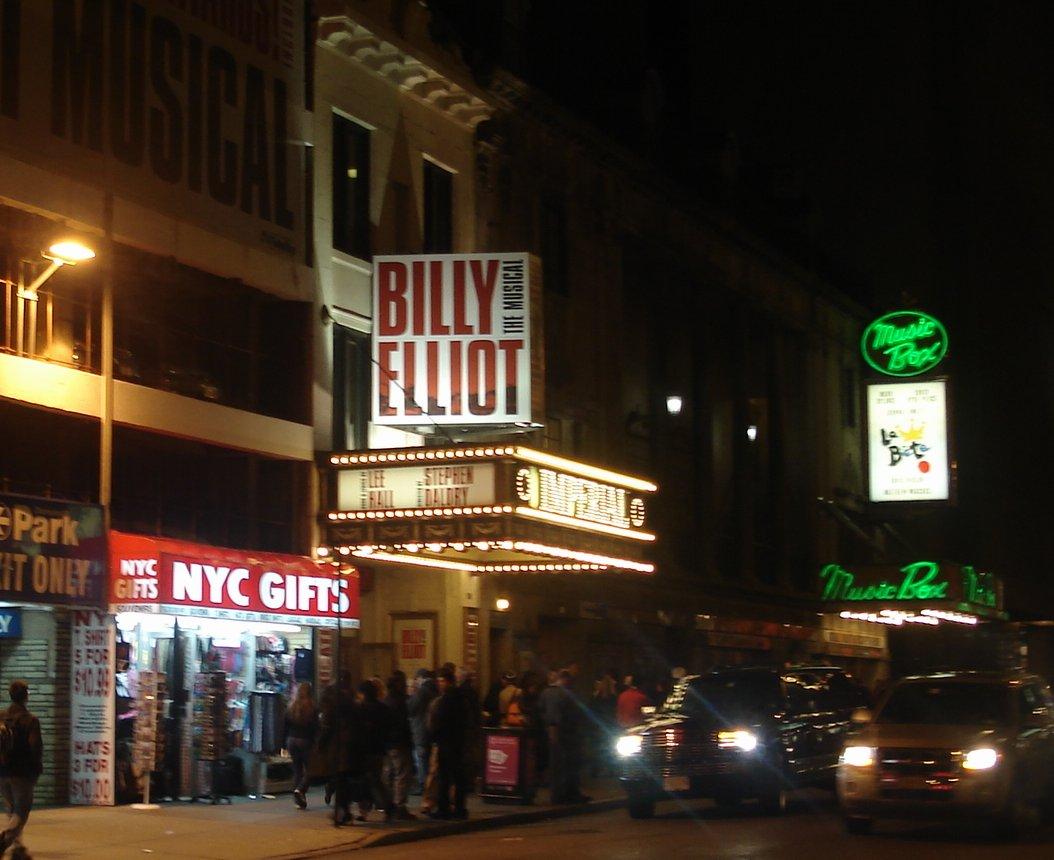 It was quite the experience. The lights, sound, and stage-work were impressive, and the music and dancing were very good. But everything else — the story, the morality, and the gender issues — left a lot to be desired.

The was not your average high-school musical (nor did we pay high-school musical prices). The acting was very good, even that of Billy, who must have been 13 or 14. The lighting was superb: Franci and I particularly liked the effect where they shone lights from the front of the stage while the actors were dancing solo, creating huge dancing shadows on the back wall of the stage. And the stage machinery and some of the backdrops that went up and down were art in and of themselves.

The story, however, was at best sub-par. For a start, it’s a re-hash of the old “working class kid discovers his amazing art talent” plot. That might be okay if it were done right, but among other things, the musical never answers the question of why Billy starts doing ballet (he doesn’t even know himself). It was also very predictable. You knew from the start that he’d end up at a Ballet School, that his miner father would learn to appreciate his ballet, etc etc.

As for morality, it’s definitely not what you’d call a family show. You’d need a lot of fingers to count all the F’s and JC’s. Not pleasant. However, this one I’m almost willing to overlook — miners, even British ones, aren’t known for their love of the Queen’s English.

But then there was the show’s all-consuming focus on gender issues. Where “gender issues” here means “we have no clue what healthy masculinity looks like”. We’re presented with rough-as-guts miners who swear and yell at their kids on one side, and effeminate ballet dancers and cross-dressing males on the other. Obviously being macho and yelling at your kids is bad, so what other option do we have? Billy Elliot’s theme seems to be that being a man means “expressing yourself”, taking up ballet, and becoming one with your feminine side. Me oh my, how enlightening and original!

I was about to say there’s not one portrayal of healthy masculinity in the show, but that’s not strictly true. There was one three-second scene where a good father picks up his toddler daughter in a playful fashion and they laugh together. There was a really nice sigh from the audience at that point (as in, “oooh, how sweet”). People aren’t silly, they know — that’s the real deal, that’s the good stuff!

(Maybe this is another whole topic, but as much as I liked the choreography of the classical dance Billy did with an older male dancer, ballet would improve one-hundredfold if they got rid of the guys’ super-tights. I really, really don’t want to see the outline of a dancer’s reproductive system while he’s doing his moves. I’m sorry, but whatever one’s position on moral or gender issues, it’s distracting, gross, and almost cancels out any gracefulness.)

You could ask, “Well, c’mon, it’s a Broadway show in New York City — what were you expecting?” Fair question. I don’t really have an answer, except to say that now that we’ve had our fill of Ultra-Meaningful Broadway Entertainment, we’ll be a bit more choosy about which show we go to next time — assuming there is a next time. :-)

I think we’ll take a pass on Billy Elliot! There are some outrageous broadway shows, I guess there must be a whole group of people into that, or more likely the producers are just too into themselves and wanting to be shocking. the prices are too bad as well, there are a list of shows I’d love to see if I could.

I’ll have to say, I was having a bit of a gender issue reading this. I assumed Ben was writing since Franci said he would be the one reporting on the play. But near the end I realized it must be Franci writing, which meant I would have the reread the whole post from a new perspective. When I scrolled up to the top, yup—it was posted by “Franci.” But then I remembered (and immediately saw) “Last Friday, Franci and I….” Now when I scroll up to the top I see that “Ben” posted. Guess that clears it up a bit. :)

Yeah, Ben wrote the post logged in as me, so that’s why it said that — sorry for the confusion!

Heh, that’s hilarious, Hannah. Anyway, my bad. And fixed on the website now. Franci and I obviously “need” separate computers. :-)