We’ve been in New York City for just a little over 5 months now. I can hardly believe it’s been that long, and on the other hand it feels much longer! I thought I’d use this post to update you in a bit more detail about how we’re doing.

Marica is settling in nicely. In the beginning she spoke of New Zealand and Blitzie pretty much every day. Now it’s maybe a couple of times a week. She has gotten over her fear of preschool now (“But I don’t know anyone there!”) and looks forward to it — to the point of counting down the sleeps until the next preschool day.

She loves learning and can count to a hundred with minimal help. On the days that she is at home, I have been doing a little bit of ‘school’ work with her — learning numbers and tracing them. I think we’ll soon move onto some basic addition and subtraction, as well as focussing a bit more on letters as well.

Marica astounds us sometimes with what a good grip she has on the Gospel. She understands that we are sinful, that we need God’s forgiveness and that we attain that through Jesus’ death on the cross. She loves to pray before mealtimes, and it usually sounds something like this these days: “Thank you Jesus for the nice food and the nice day. Thank you for gwowing my nice long hair. In Jesus’ name, Amen.” (She can’t say ‘r’ yet.)

And nice long hair she certainly has. Hardly a day goes by that some stranger doesn’t comment on her hair — not only platinum blonde, but long. Hair brushing can sometimes be a bit tedious, but the complaining soon stops when her mother threatens to cut it off as short as Pappa’s hair. :-)

Esther is doing much better now that she has recovered from Roseola. She’s eating again and full of smiles. I thank God regularly that she is such a pleasant and easy baby. She now has a total of 7 teeth, and is pulling herself up and standing regularly while holding onto something. Standing on her own and walking is still a ways away, I think.

Her words so far are “Pappa”, baba, woof, ba (for ball), tatta and ba-byeee. I have never in my life seen a baby mother baby dolls like her. She just pours love on the baby dolls and sometimes just anything. The other day I found her hugging a rolled up towel that I use as a draft stopper, rocking to-and-fro and saying ‘aaaahhh’ to it!

Esther will celebrate her first birthday this Sunday, on the 7th.

Ben is enjoying his job. He works very hard and works long hours, but he finds satisfaction in it. He says the work is challenging but rewarding.

When he is home he spends a lot of time playing with the girls and just hanging out with me. I love that. :-) We’ve started reading Tim Keller’s The Reason for God together. We’re only a short way into the book but we like it so far!

He’s been playing the piano at church when the usual pianist can’t make it, and were surprised the other day to find out that he gets paid for it! At church he’s also met some men about the same age as him that he clicks with. They’re all thinkers, have young families, are serious about their faith and seem to have a lot in common. A couple of weekends ago they went out for a beer together and hung out and talked. Their wives think they should do more of that kind of thing. :-)

Life has been getting busier for me (Franci). There is always something else that needs doing, and I’m constantly learning to re-prioritise. I think part of that stems from me trying to live like I’m still back home, instead of accepting that I’m in the city, with the challenges that that brings. I was chatting to a friend about this a while back, and I realised that it’s not just I that feel this way — living in NYC is in some ways just plain harder and more time-consuming.

Here are a few examples. Laundry is a special trip out of the house, not just something you throw in the machine while you’re doing something else around the house. Doctors here don’t seem to think that appointment times are something worth paying much attention to. The shortest wait I’ve had so far was 40 minutes. The longest was just over 2 hours. And that’s with an appointment. Public transport brings with it its own obvious challenges, as does walking everywhere. Especially when it rains. :-) The weather is also taking some getting used to. The summer was HOT and now in autumn, the daily high is about 10 C. In the winter it will be about 0 C. Thankfully the apartment is heated well and the heat and hot water is included in the rent! And talking about the apartment… it’s not exactly large. :-) I try to keep it pretty tidy otherwise my brain gets messy too, but sometimes that’s just not possible. The place is lived-in, and that’s part of what makes it a home.

And yet… this city is growing on me. I’m actually starting to like it. It’s New York City after all — the greatest city in the world! And I’m starting to see why. It has a certain charm, and it has so much to offer. Like an awesome sky-line, tonnes of museums, great parks, low-to-high end shopping, just to name a few things. And like the Broadway show we hope to go see tonight. :-) 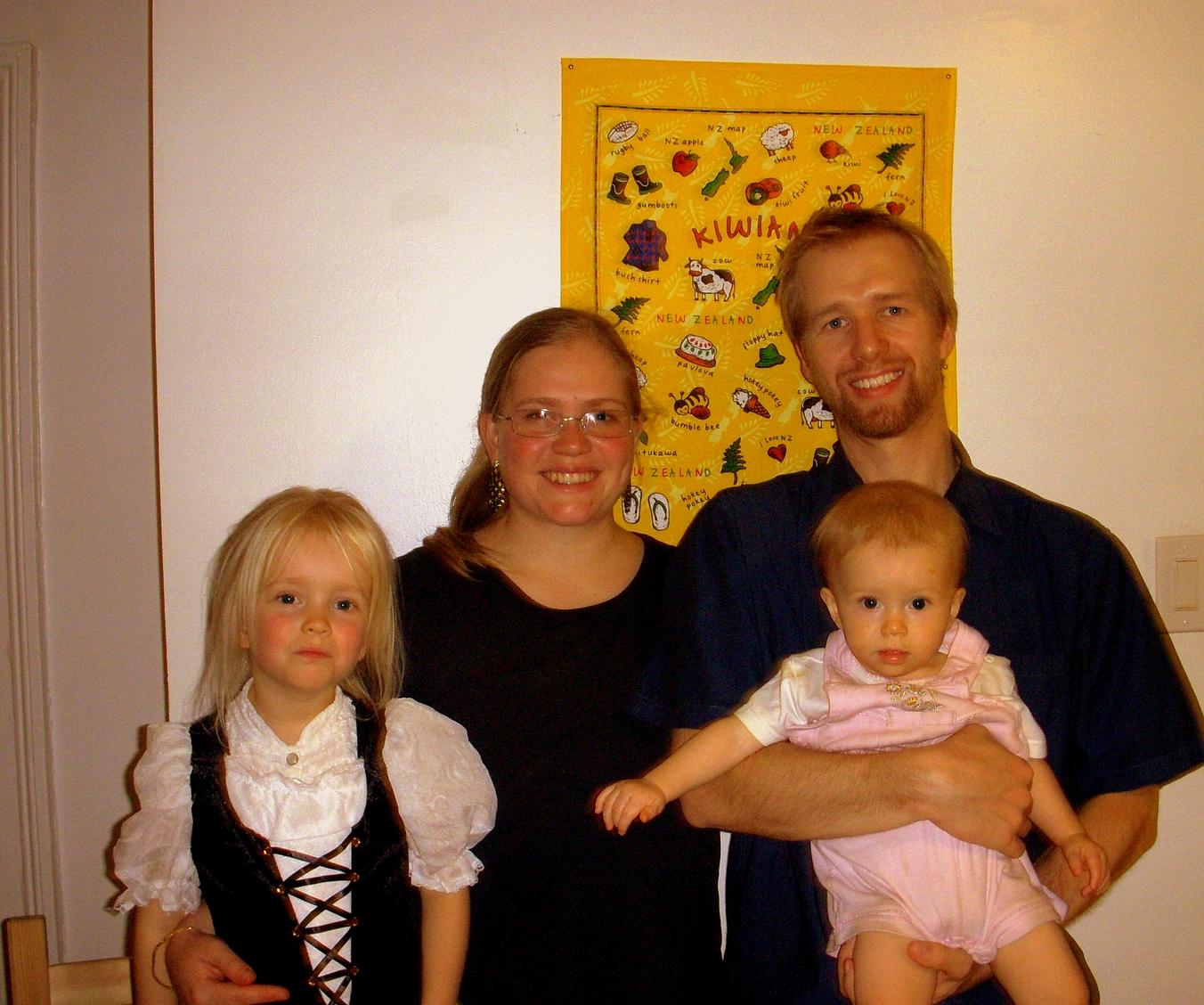 I love this update! I miss you guys, and I can’t wait to see you guys next. You are all beautiful people, inside and out. I can’t believe Esther has 7 teeth!!!!! That is awesome! My love to all of you! See you in a week and a half-ish!!

Also, I love that pic!

Good to see you all looking so good! Thanks for the pic and update. Will look forward to reading the update later as I’ve got to rush out the door now :o)

We’re very thankful you guys are here and I must say, when Marica thanks God for her nice, long hair…it is soooo cute!:)

What a beautiful picture! :) Where did Marica get that top? Or rather, where did you get that top that Marica has on? It looks so wonderfully old-fashioned. The more I read of you all the more I look forward to seeing you, though I’m not sure about this big-city life.